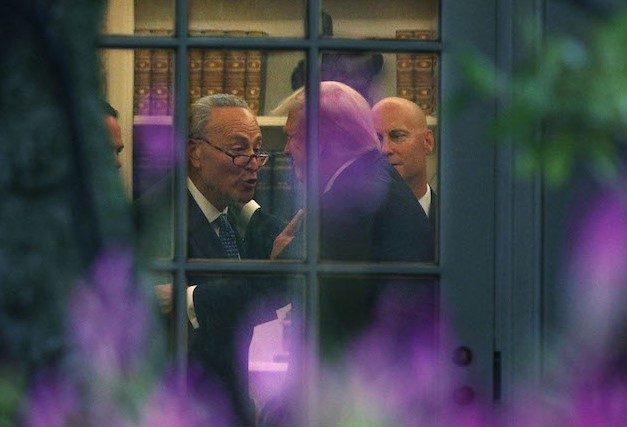 First, Trump, Schumer, and Pelosi had a deal. Then they didn’t. Follow the tick-tock of Trump’s immigration deal with NTK Network.

It has been a confusing 18 hours in Washington, D.C., and it’s all centered around the latest supposed deal between President Trump and the two leaders of the minority party, Sen. Chuck Schumer (D-NY) and Rep. Nancy Pelosi (D-CA).

At around 9:55pm ET on Wednesday night, Schumer and Pelosi announced a deal with Trump that would make permanent protections provided by President Obama’s Deferred Action for Childhood Arrivals (DACA) policy and, notably, not include funding for a border wall with Mexico.

BREAKING: Schumer, Pelosi announce deal with Trump to protect young immigrants; will include border security, but no wall.

If true, the deal would have been a major win for Schumer, Pelosi, and Democrats – getting the president to make permanent a program he once opposed, without insisting on payments for his top immigration priority, a wall on the U.S.-Mexico border.

But Trump, in a Thursday morning tweetstorm, said there was “[n]o deal” on DACA on Wednesday night:

No deal was made last night on DACA. Massive border security would have to be agreed to in exchange for consent. Would be subject to vote.

Trump also reiterated his support for both the “WALL” and for DACA:

The WALL, which is already under construction in the form of new renovation of old and existing fences and walls, will continue to be built.

Does anybody really want to throw out good, educated and accomplished young people who have jobs, some serving in the military? Really!…..

Trump expanded on his comments outside the White House on Thursday morning, saying Speaker Paul Ryan (R-WI) and Senate Majority Leader Mitch McConnell (R-KY) are “on board” with DACA, and correcting a reporter who suggested DACA is “amnesty.”

Trump on DACA: "We're working on a plan," says Ryan/McConnell are "on board." "The wall will come later." https://t.co/r9IBNTMTfY pic.twitter.com/PnFeuBGFrC

Asked whether he favors "amnesty," @POTUS – boarding Air Force 1 – shouted back: "The word is DACA."

As of Thursday morning, it’s unclear whether a deal will emerge, or what the parameters of that deal might be. However, Trump seems adamant on both building a wall and protecting so-called DREAMers, undocumented immigrants brought to the U.S. illegally by their parents.