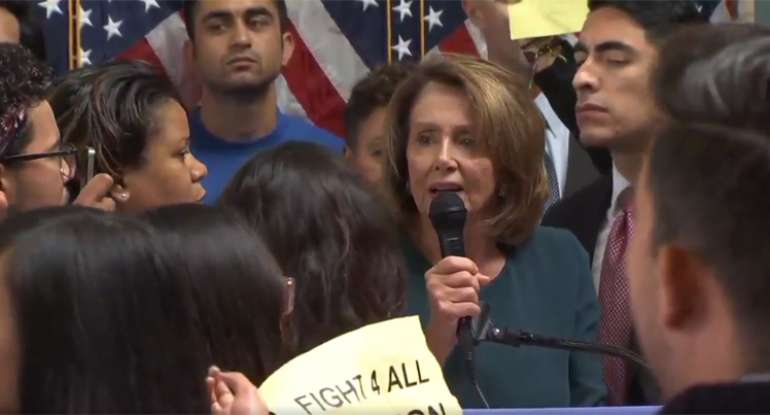 A press conference being held by House Democratic Leader Nancy Pelosi came to a stand-still as immigration activists stormed the room. There message was simple. They, not Democrats, are the real resistance to President Donald Trump.

The group claimed that they were “undocumented youth” who are “unafraid,” in a series pre-planned chants, which were recorded on Facebook Live by NTK Network. Pelosi was accused of leading a party which had become an “out of control deportation machine” that had “traded away” their parents through immigration enforcement. They also let their feelings be known in regards to recent deals cut with President Trump.

“We undocumented youth will not be a bargaining chip,” they said.

“Democrats created an out of control deportation machine [and] handed it over to Trump,” they chanted. “We demand accountability. Democrats are not the resistance of Trump—we are! We undocumented youth, demand that you hear our voices.”

The protestors were even further left of Pelosi who is a supporter of the DREAM Act which would allow for children of illegal immigrants to remain in the United States legally despite the criminal actions of their parents.

“Congresswoman Pelosi, you called this press conference in our name to defend the so-called ‘Dream Act,'” they chanted. “But you’ve already traded in our parents in our name. Last week you announced that you had agreed with President Trump, and I quote you, ‘to work out a passage of border security,'”

Next up on their hit list was President Barack Obama.

“We cannot say, however, we are surprised,” they continued. “We remember all too well how for eight years the Democrats laid siege to our communities, raiding and deporting nearly three million people of our family members and loved ones. Where was your resistance then, Miss Pelosi? Did you think we would forget?”

Pelosi tried to speak at certain points but was drown out.

“We are the resistance to Trump, not the Democrats,” they continued. “We extend our arms in struggle to our parents and our loved ones.”

“With you, we are prepared to struggle side by side in this fight,” they chanted.

Some protesters held up signs reading, “Democrats are deporters.”

Previous Article
The Mooch: Tom Brady Not Allowed to Go To White House Because of Past With Ivanka…
Next Article
The One Conservative Voice on The View Is Leaving. And Looks Like It’s Because of Hillary