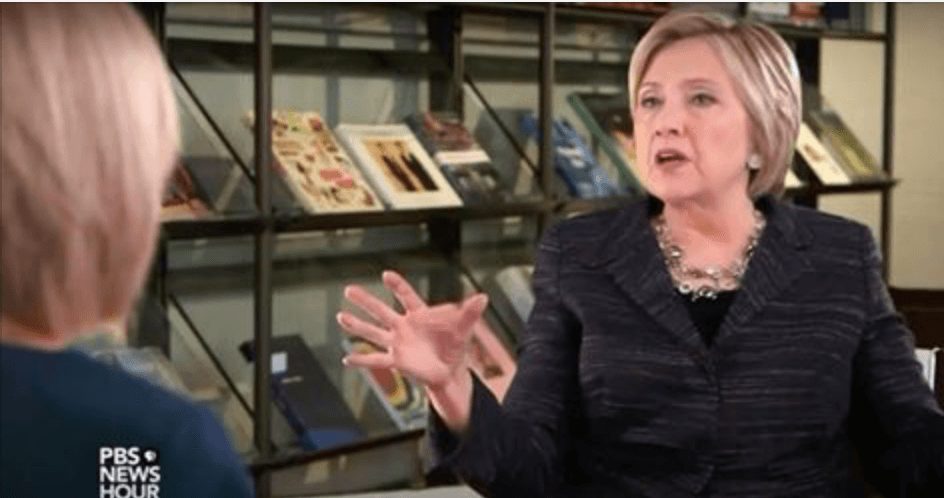 PBS host Judy Woodfruff managed to seemingly cross a line while interviewing Hillary Clinton about her recent book, What Happened. Woodruff, a veteran political journalist and TV host, questioned Clinton specifically about a meeting between her husband and Attorney General Loretta Lynch.

Clinton, growing irritated, denied that the imagery of the meeting did any material damage to the campaign.

Bill Clinton and Lynch privately met last summer on her airplane in the midst of the federal investigation into Clinton’s private email server use. The two claimed the meeting was innocuous, but the summit raised concerns about the impartiality of the Justice Department.

PBS host Judy Woodruff noted then-FBI Director James Comey’s testimony that the tarmac meeting made him believe the Justice Department could not “credibly complete” the investigation, starting the chain of events that ultimately led to his late-October letter to Congress reopening the email probe.

Clinton has called the letter determinative in her loss to Donald Trump.

Here is how the exchange played out…

“So, my question is, to what extent did Loretta Lynch and President Clinton make a costly mistake?” Woodruff asked.

“Judy, I just don’t buy that,” Clinton said. “I honestly reject that premise, partly because there’s a chain of command in the Justice Department. There’s a deputy attorney general. We all now know who it was, Sally Yates, a woman of experience and integrity.”

Where Clinton and Woodruff did find common ground was on the “optics” of the meeting which Clinton admitted were “not good.” Although while she did make that admission, Clinton immediatly reverted back to casting blame on James Comey’s letter to Congress, calling it the “proximate cause of my defeat.”

“But my point is, he wouldn’t have been in that position had Loretta Lynch not pulled back after that meeting with President Clinton,” Woodruff said.

“Judy, I don’t believe that,” Clinton said, sounding exasperated. “I mean, he was in a position that was subordinate to the chain of command in the Justice Department. So, Loretta Lynch recuses. It’s like when [Jeff] Sessions recused. The deputy attorney general steps forward and starts, you know, running the investigation.

“There were plenty of people who were in that chain of command who were telling him, I’m told, you know, OK, nothing there, end it,” she added. “And that’s not what he did.”

Previous Article
The One Conservative Voice on The View Is Leaving. And Looks Like It’s Because of Hillary
Next Article
O’Reilly Snaps on Matt Lauer After Today Show Host Gets Snarky with Question