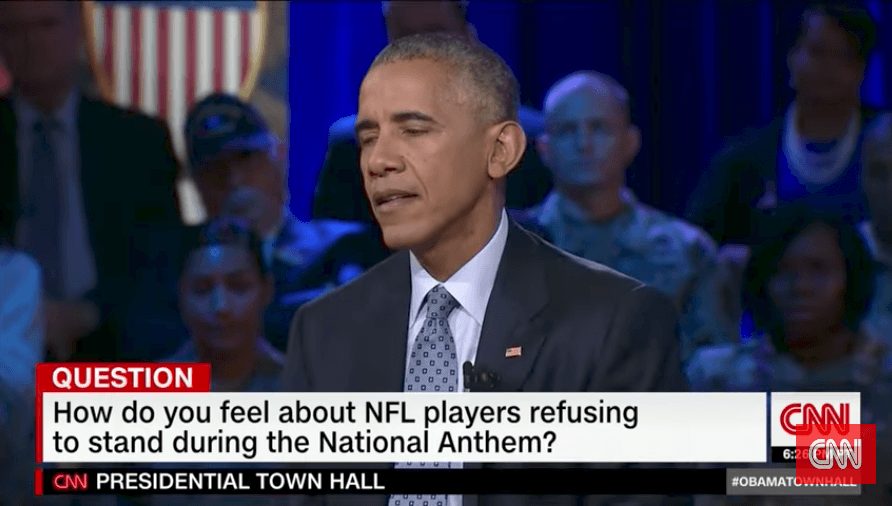 The former president touched on the Trump/NFL controversy this Monday, according to The New York Times.

Buried at the bottom of a New York Times piece on ex-President Barack Obama’s recent speaking circuit is a one-liner on the recent controversy between President Donald Trump and the NFL.

Obama, who thus far has chosen carefully which political issues he puts his public thumbprint on, lamented the politicization of the NFL, according to the Times:

Despite a mostly button-down tone, Mr. Obama was not entirely without mirth. Toward the end of his speech he referred to President Trump’s recent tweets aimed at N.F.L. players. “Our big problem right now is politics,” he said. “Can’t even get it out of football!”

President Trump has, through his personal Twitter account, tweeted or retweeted about standing or kneeling for the national anthem at least 22 times since Saturday.

According to CNN, Trump spent part of a private dinner on Monday night marveling at how his feud with the NFL “really caught on” this weekend.

Of course, Obama is not innocent in this matter either. He defended former San Francisco 49ers quarterback Colin Kaepernick, who started the kneeling trend, in a CNN town hall last year.

“Well, as I’ve said before, I believe that us honoring our flag and our anthem is part of what binds us together as a nation. But I also always try to remind folks that part of what makes this country special is that we respect people’s rights to have a different opinion.”

In fairness, Obama was responding to a question from an audience member.

Previous Article
Dem. Rep Sheila Jackson Lee “Took a Knee” in the Middle of the House Floor
Next Article
Here We Go… Democratic Congressman To Introduce Articles Of Impeachment Over NFL Remarks