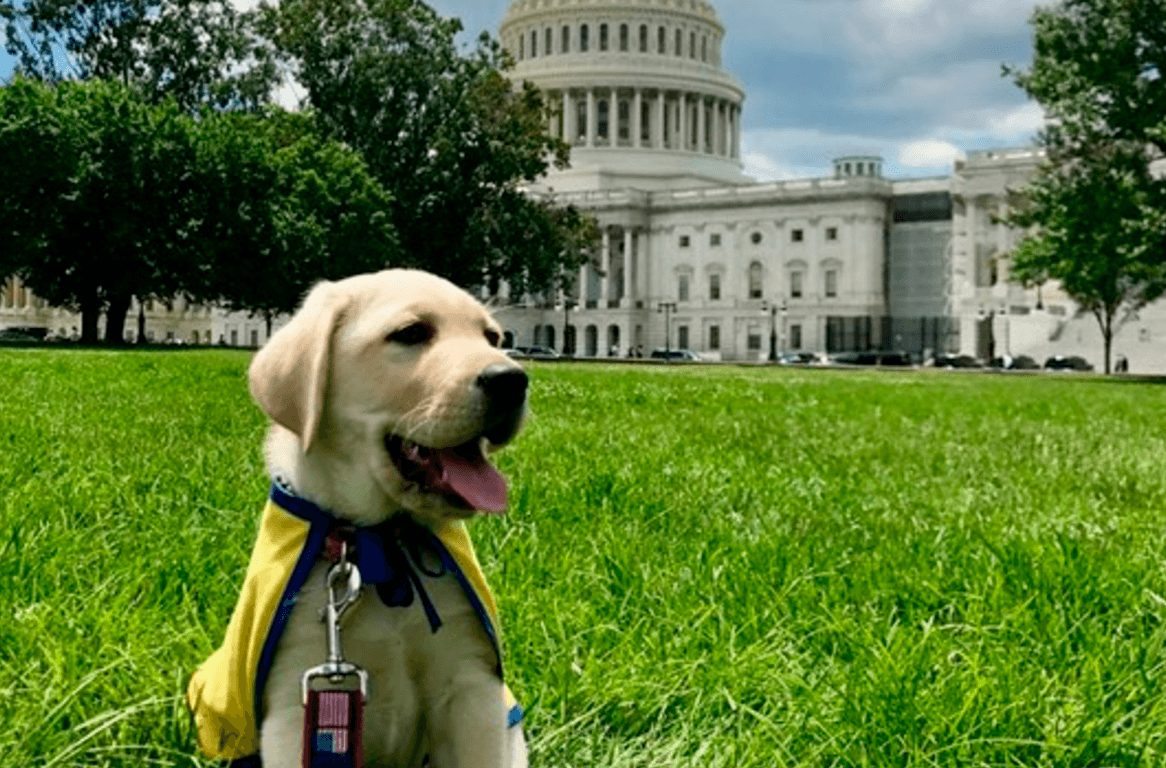 Veterans’ advocates are urging Congress to make the Department of Veterans Affairs (VA) support organizations that provide service dogs to veterans suffering from post traumatic stress disorder and other conditions.

The Association of Service Dog Providers for Military Veterans held a press conference Tuesday with members of Congress to advocate for the Puppies Assisting Wounded Servicemembers Act (PAWS Act), which would provide $25,000 grants for eligible organizations to train and pair service dogs with a veteran. The bill would also prompt the VA to launch a pilot program looking at the links between service dogs and mental health.

Virtually every veterans’ advocacy organizations has thrown support behind the legislation.

The bill was introduced in a previous session of Congress, however, GOP Rep. Ron DeSantis of Florida believes the bill has a real chance this time around. This may turn out true, as the Trump administration has made veterans’ issues a priority.

“We’ve introduced the PAWS Act in an attempt to harness the VA to recognize the efficacy of trained service dogs for vets symptomatic with PTSD, and we have up to 200 co-sponsors and huge bipartisan support, and I think it’s the type of thing that has broad support in the public,” DeSantis said.

Sometimes the “inertia of the swamp will kick in—and you have to overcome that, even with a bill as uncontroversial as this,” DeSantis noted.

Charities have had success in training up service dogs and pairing them with veterans in need. This has resulted in a major improvement in mental health, DeSantis pointed to.

“We started to see veterans complain that the VA doesn’t recognize service dogs as a way to treat conditions like PTSD, and we had some veterans who luckily were able to get a service dog who think they wouldn’t have been able to make it if not,” DeSantis said.

Organizations like the Human Animal Bond Research Institute have handed out research grants to find a link between service dogs and improved mental health outcomes. There are good studies to support the link between service dogs and lower rates of depression, stress, anxiety and improved sleep and social interaction, according to Steven Feldman, executive director of Human-Animal Bond Research Institue. Notably, all of these conditions are associated with post traumatic stress disorder (PTSD).

The VA is more than willing to use drugs for PTSD that have only been studied for conditions associated with PTSD, and so likewise, the VA should acknowledge that service dogs are useful in the treatment of PTSD, Feldman noted at the press conference Tuesday.

“There are plenty of cancer drugs that are still being studied, but when we know that they save lives, we make sure that people get them even while we’re studying them,” Feldman said. “So here we have these service dogs that provide profound benefits and no serious side effects, so why aren’t we making sure our veterans get these animals?”

Numerous veterans brought service dogs to the event and spoke about how the animals saved their lives from certain calamity.

Army veteran Maureen Normann said before she met her service dog Prince, she felt isolated and alone. Most of her time was spent between the local VA hospital and her home, due to cognitive problems from multiple traumatic brain injuries. Now with Prince at her side based on a VA doctor’s recommendation, she is able to get out of the house more often and even performs on stand-up comedy tours.

U.S. Navy veteran Ian Green, who also brought his dog to the event, said that one most neglected elements of PTSD in popular understanding is that the disorders often effect the whole family, not just individuals.

“I was having terrible nightmares, was stressed, didn’t know how to deal with it, and I met another service member with a dog and it drove me to find a service dog and it was kind of the stepping stone,” Green said.

“Within a month of getting DD, I got a job. Within a few months, I was advocating on behalf of veterans,” he said. “What this all leads to is: I happen to know that this dog saved my life. I also happen to know that other dogs are going to save others’ lives.”

The House Committee on Veterans Affairs held a hearing Tuesday morning to discuss a number of bills, including the PAWS Act.