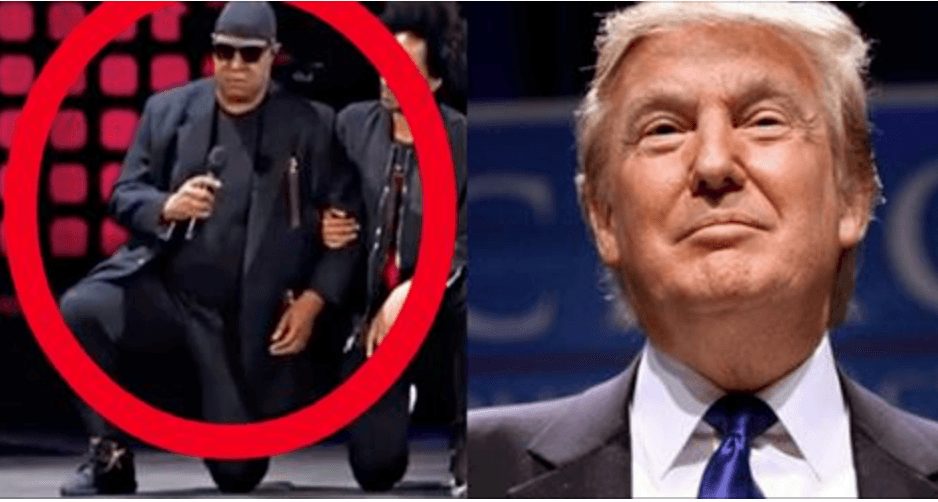 The legendary Singer, Stevie Wonder, took a knee on Saturday night but for a very different reason. The move should delighted all Trump fans and those who stand on the side of respecting the National Anthem and Flag. It should also give pause to those NFL football players who have decided to disrespect both.

This is what Wonder had to say while performing at the Global Citizens Festival . He took a moment to address the audience about the controversy surrounding kneeling that has seemed to overtake the nation.

“Whenever you need to interrupt hate, stand down bigotry, condemn sexism, and find love for all of our global brothers and sisters, everyday,” Wonder began.

“Tonight, I’m taking a knee for America,” he continued, as he got down on one knee.

“But not just one knee. I’m taking both knees,” he said, while the audience cheered.

“Both knees in prayer for our planet, our future, our leaders of the world, and our globe,” he said, before he finished his prayer, saying “Amen.”

There is only one way and reason to take a knee and Wonder made it clear what that way was.

It wasn’t a protest move, but a move that recognized one of the most powerful things we could ever do for ourselves and our country — pray to God.

While Wonder has had his lefist moments, we have to hand it to him — this amazing gesture is what we all need to be doing.

Our love for our country and our love for God is something that can bridge divides. In the face of so much division and hatred that is consuming many in our nation, God’s love and grace is our only hope.