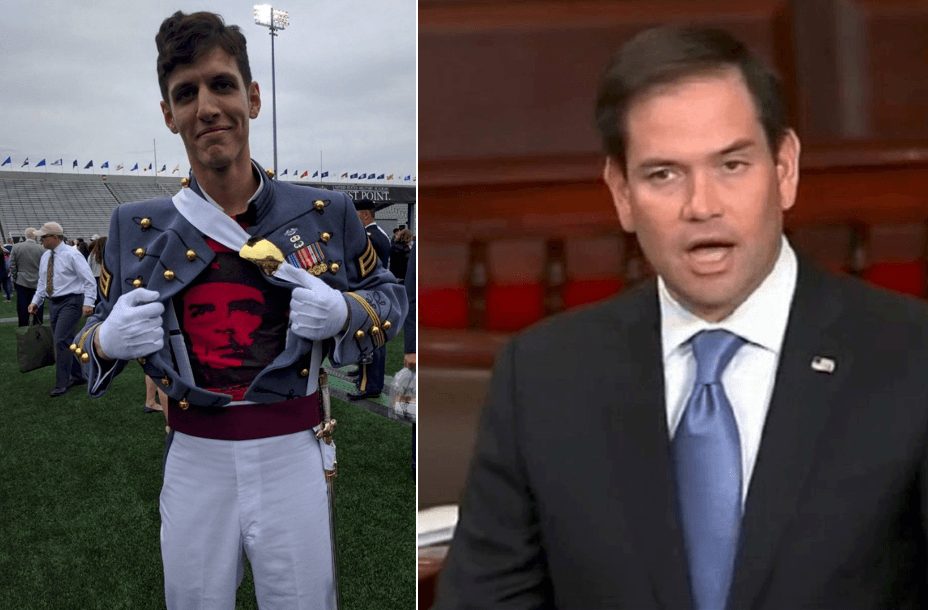 “I respectfully request the United States Army immediately nullify Rapone’s commission and pursue all available disciplinary options under the Uniform Code of Military Justice. Rapone should be required to pay back in full the cost of his education and the United States Military Academy should consider revoking his degree,” Rubio wrote.

The senator referenced Rapone’s robust social media presence posting photos of communist propaganda while in his Academy uniform, and other posts expressing his desire to foment a communist revolution.

Over half of West Point's cadets participate in Tunnel 2 Towers

Article 88 of the Uniform Code of Military Justice states “any commissioned officer who uses contemptuous words against the President, the Vice President, Congress, the Secretary of Defense, the Secretary of a military department, the Secretary of Transportation, or the Governor or legislature of any State, Territory, Commonwealth, or possession in which he is on duty or present shall be punished as a court-martial may direct.”

“It is extremely concerning that someone who so often expressed such hostile views towards the United States’ system of government was able to obtain a commission,” Rubio wrote. “Rapone’s revolutionary ideas were harbored long before he was commissioned as an Army Second Lieutenant. Were West Point administrators or faculty aware of his views and behavior?”

Former Democratic Rep. Jason Altmire of Pennsylvania, who nominated Rapone to the Academy, disavowed him and his views in a previous statement to The Daily Caller News Foundation, saying, ” I have not been in touch with him in the years since the appointment, and I was shocked and extremely disappointed in the recent reports of his indefensible actions.”

“While I strongly support the rights of American citizens to express their opinions, the actions of 2nd Lieutenant Rapone are abhorrent and appear to be in clear violation of the Uniform Code of Military Justice, in addition to being inconsistent with the values of the United States Military Academy. I have no doubt that the U.S. Army will take appropriate action,” Altmire said.

Previous Article
It’s On: Michelle Obama Goes After Trump on “Standard of Ethics”
Next Article
Pat Sajak Crushes Jimmy Kimmel – And It Only Takes a Single Tweet