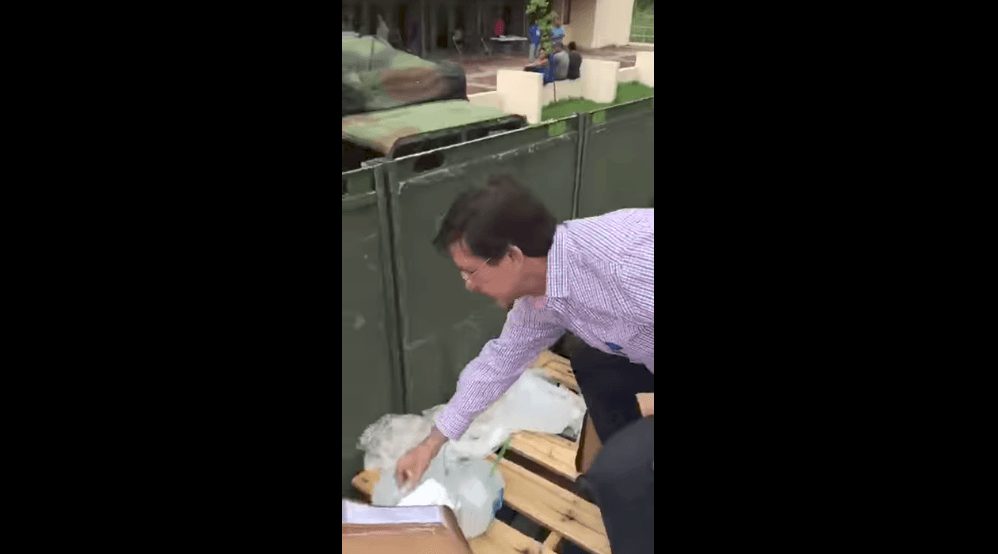 After weeks of back and forth between the Trump Administration and San Juan Mayor Carmen Yulín Cruz over the American response to Hurricane Maria, a video showing what happened to relief supplies is slowly taking over the internet.

In it’s description the video reports to show, “Fully packed meals in Trash Dumpster in Patilla, P.R. and Starvation still in effect in most of the island”

In the video a man is seen discovering what appears to be an enormous amount of meals that have been tossed into the trash. Further, it appears the meals were thrown out directly from an 18-wheeler truck that appears in the background.

It turns out the man in the dumpster happens to be the Secretary of State of Puerto Rico, Luis Rivera Marin, who then spoke to CBS News Correspondent David Begnaud about what he found:

“It was a negligent and for me criminal” insists Puerto Rico’s @LuisRiveraMarin who says he found hurricane donations exposed to rain & rats pic.twitter.com/YElRFv2KXN

Marin states: “We got tipped about the mishandling of some of the supplies in a distribution center in Patilla, and we were able to corroborate what we didn’t want to see. In a garbage dump truck we found pallets full of meals ready to be distributed at one time but now all spoiled. They were left under the rain in the open air under the sun subject to rodents and animals.”

Just two weeks ago, San Juan Mayor Carmen Yulín Cruz gave an impassioned speech calling out President Trump for what she sees as sub-par relief efforts while standing in front of pallets of unopened supplies donated by companies.

As NBC reported at the time,

The mayor of Puerto Rico’s largest city was rebuked by President Donald Trump on Saturday after pleading for more federal assistance in the wake of Hurricane Maria.

“We are dying, and you are killing us with the inefficiency and the bureaucracy,” San Juan Mayor Carmen Yulín Cruz said Friday at a news conference. She highlighted donations from companies and others, including 200,000 pounds of food donated by Goya, as a contrast to federal help.

This was President Trump’s Response:

Previous Article
Miramax Insider’s Damning Facebook Post To Hollywood Is Taking Over The Internet
Next Article
BREAKING: FBI Informant Claims He Was ‘Silenced’ On Russian Nuclear Corruption by Obama DOJ