After Claiming She Would No Longer Comment – Rep. Wilson Went Back On TV To Bash Gen. Kelly One More Time 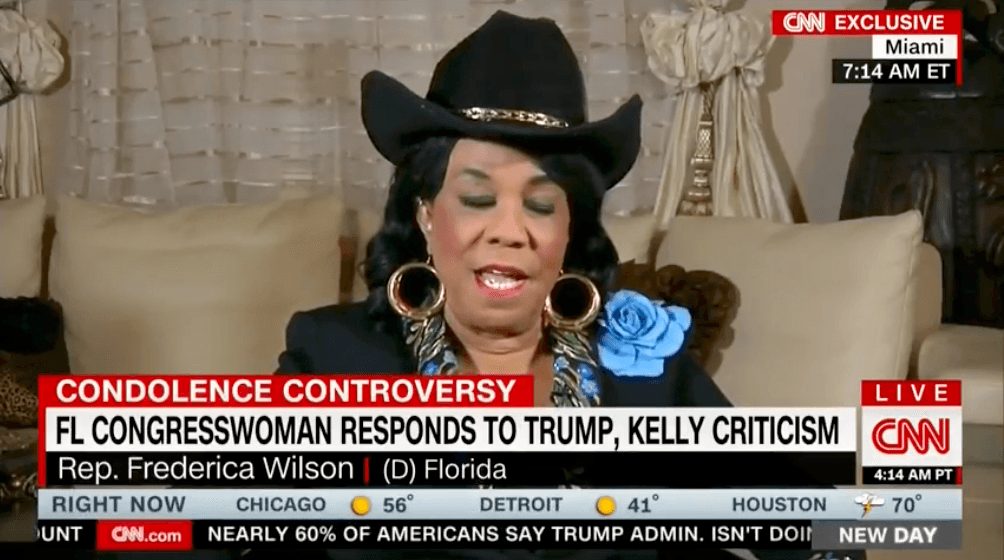 Unless you have been living under a rock, you are aware the yesterday, at the White House Press Briefing, General John Kelly gave an impassioned and emotional speech regarding the treatment of deceased US Soldiers. Kelly himself is a Gold-Star father and described in detail his own experience losing, and then burying his son after he was killed in Afghanistan.

The General, and current White House Chief of Staff, went on to lambaste Congresswoman Frederica Wilson for what most people view as unforgivable comments politicizing a private phone call made by President Trump to a Gold-Star family shortly after they had lost their son in Niger.

Shortly after the press conference, Wilson’s spokesperson said she will no longer be speaking on the controversy, according to the Washington Examiner:

“The congresswoman will not be making any further comment on the issue because the focus should be on helping a grieving widow and family heal, not on her or Donald Trump.”

In what most consider not to be a surprise, Wilson has continued to speak out and even went on CNN’s New Day to fire back at Gen. KElly accusing him of lying about her.

“I feel sorry for Gen. Kelly, he has my sympathy for the loss of his son,” she said. “But he can’t just go on TV and lie on me.”

The “lie” Wilson is referring to is the story Kelly told of the Congresswoman shamelessly taking credit for securing funding for a new FBI building in Florida. Several other accounts have corroborated Kelly’s story. Wilson then went on to call Kelly a racist for his assertion that she is an “empty barrel”.

Note to Congressman Wilson – calling everything negative said about you “racist” undermines the seriousness with which many Americans take true racism that exists in our country.

Below is the full clip from CNN.