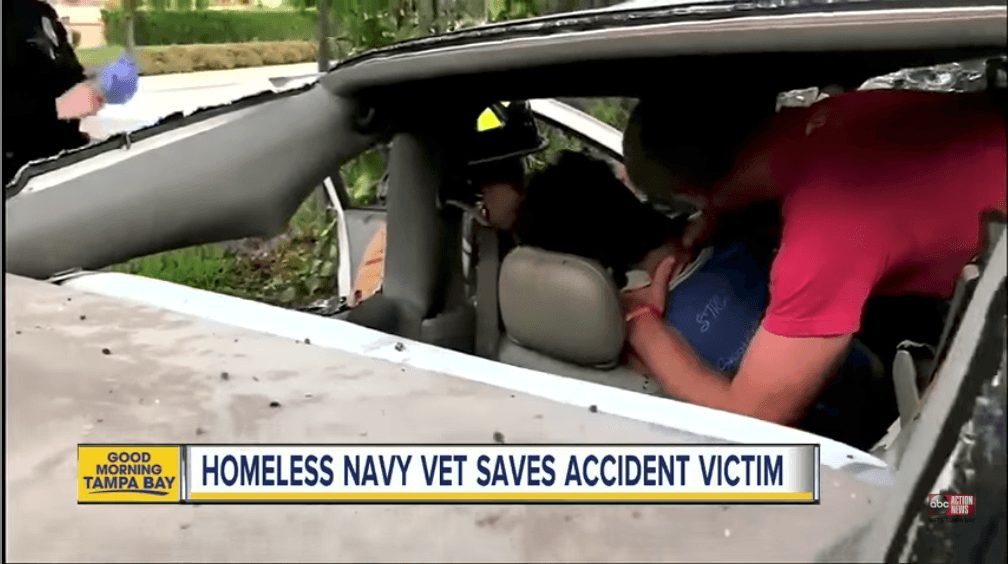 Meet Travis Wilson. Wilson, of Pembroke Pines, Florida, if a former Navy Corpsman who is now homeless. Homeless as he may be however, Wilson is still every bit the hero he was while serving America.

While applying for housing in Florida recently Wilson heard a loud crash outside the building. Dropping what he was doing Wilson raced outside and dove headfirst into the wrecked vehicle to help save the life of a passenger inside.

He told reporters at WPLG:

“We get around the corner and I see what’s going on and speed up, and then, I just turn it on and go sprinting to the vehicle.”

Primarily, Wilson stabilized the neck of the blood-soaked driver until paramedics could arrive, using his hands to mimic a neck brace.

“It’s like putting a neck collar on them to stop them from moving their neck. This is instinct.”

Despite the fact Wilson knew the car could go up in flames at any moment, he was willing to put his life on the line to help:

The individual whom Wilson assisted was taken to Memorial Regional Hospital with life-threatening injuries. The other person involved in the crash is said to be fine, according to “GMA.”

Previous Article
After Claiming She Would No Longer Comment – Rep. Wilson Went Back On TV To Bash Gen. Kelly One More Time
Next Article
An Oscar Winning Actress Just Came Forward About Harvey Weinstein And Her Story Is Appalling