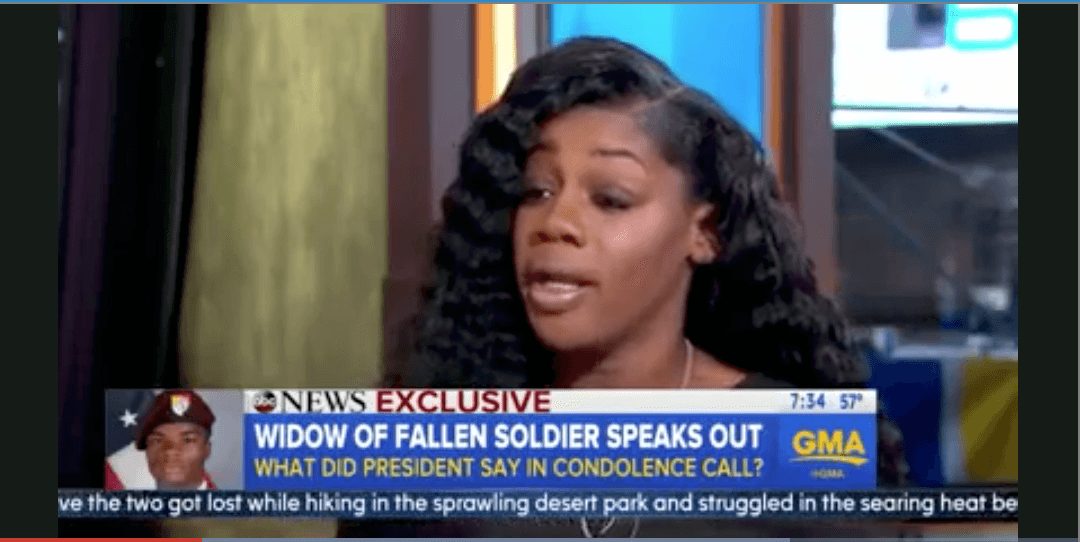 The phone call made her “very upset and hurt; it made me cry even worse,” Johnson said Monday on “Good Morning America,” in her first public appearance since she received Trump’s call Tuesday.

Trump’s suggestion that her husband “knew what he signed up for, but it hurts anyways,” was particularly offensive, Johnson said.

“And it made me cry. I was very angry at the tone of his voice, and how he said it,” she said.

Her husband, Army Sgt. La David Johnson, was one of four U.S. servicemen killed in mysterious circumstances in Niger on Oct. 4.

Democratic Rep. Frederica Wilson, who was in the car when Johnson received Trump’s call, ignited a national controversy by sharing Johnson’s negative impression of Trump’s comments with local media.

The controversy took on added meaning after White House Chief of Staff Gen. John Kelly excoriated Wilson for sharing the contents of the call during a Thursday press briefing. Kelly referred to Wilson as an “empty barrel” and accused her of selfishly bragging about her political accomplishments during a somber 2015 FBI field office dedication for two slain officers.

Wilson disputed Kelly’s account of her speech at the building dedication and a video, released by the Sun Sentinel Friday, revealed Kelly mischaracterized her comments.

Before recounting her phone call with Trump, Johnson expressed concern about the lack of information she has received from U.S. officials regarding the circumstances of her husband’s death.

“I don’t know what’s in that box,” Johnson said. “It could be empty for all I know.”

Previous Article
Two NBA Hall Of Famers Just Laid Down The Law On Anthem Protestors
Next Article
While Other NFL Players Kneel, Tom Brady Made A Powerful, Pro-America Statement Before The Patriots Game