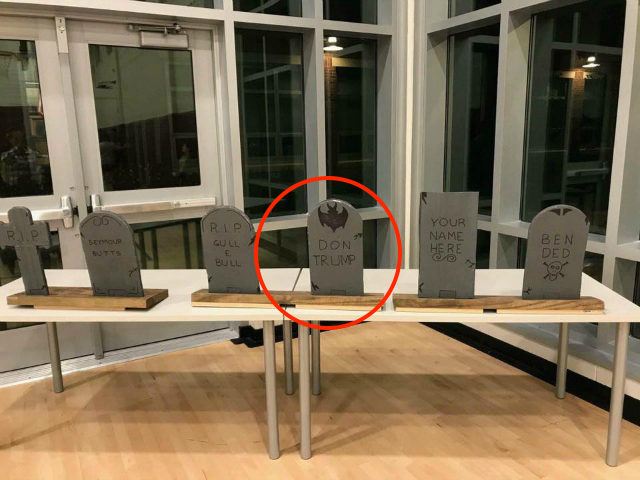 Parents are disgusted after a disrespectful decoration was discovered in the West Parish Elementary School’s “Halloween Happenings” party in Gloucester. One of the tombstones in the elementary school display featured the name “DON TRUMP” on it.

A concerned parent and local official Amanda Orlando Kesterson posted this message on Facebook with a photo of the display:

I was sent this photo which depicts decorations from last night’s Halloween party at West Parish Elementary School. As you can see, the middle tombstone has the name of the president on it.

I find it absolutely despicable that the PTO of one of our local elementary schools would bring this political agenda before our children. The parents or teachers responsible for this disgusting display should claim responsibility publicly and apologize publicly as well. If it was an employee of our school system, I expect Dr. Safier to deal appropriately with this individual for this political ploy which has no place in our schools.

The school district has since apologized for the display, saying “While, according to the parent, this was designated to be humorous, a number of attendees rightfully felt that it showed disrespect. In planning future events, it will be made clear to organizers that school is not the place to engage in or display political agendas or opinions.”

Children who attended the event were reportedly as young as six years old.