OPINION: PERFECT TIMING TO FIND OUT IF DEMOCRATS WOULD CLOSE GOVERNMENT FOR PLANNED PARENTHOOD 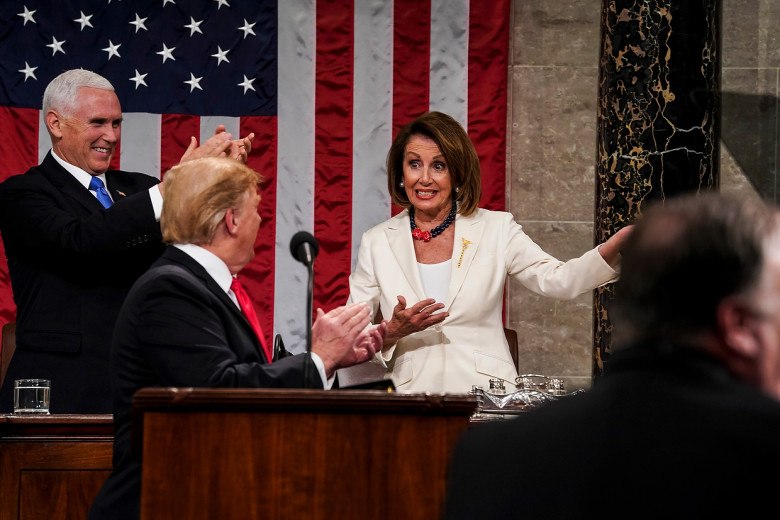 Donald Trump didn’t turn out to be so “Reaganesque” after all.

He blinked, losing his high-profile stare-down in the shutdown showdown to Speaker Nancy Pelosi. In part because of a slowdown: in direct contrast to the Gipper, President Trump slunk out of the kitchen when he couldn’t stand the heat of a nationwide sick-out by air traffic controllers.

And puh-leeze: he did not “set the table very nicely.” The speaker knew she had — and has — the president’s number when he panicked and started negotiating with himself the previous weekend, offering concessions on Dreamers and more.

But look. There is still a chance to salvage this situation. And no, it’s too soon to declare a national security emergency to divert funding to the wall. That’s another certain route to a Ninth Circuit slap-down via some left-coast district court judge panting for his 15 minutes of fame.

Rather, it’s time to again let Donald be “The Donald” — Art of the Deal-style.

Trump should engage in the same kind of negotiation that has forced the Mexicans, Canadians, Europeans and Chinese to the table: threaten to take away something Pelosi can’t live without in order to get something he wants.

The president gave Shutdown Nancy a taste of this medicine in canceling her expensive junket to points east, and embarrassed her in the process. Briefly, the government closure shared airtime with reports of lavish taxpayer-funded congressional global excursions over the years.

Only for now, Trump should sharpen his focus — for a sharper contrast with Madame Speaker’s priorities. The president should announce a few particularly wasteful and/or distasteful programs he absolutely will not allow to be funded (or for which funding will be delayed) as long as he doesn’t get the wall.

There are at least a few. Bullet trains in, say, California. Bike trails in, mayhap, San Francisco.  Solyndra-style solar subsidies.

Or maybe just one. In fact, let me zero in on an especially timely possibility: Planned Parenthood, which the president actually promised to defund.  Timely because the fine people at PP and the rest of the pro-abortion movement have come together to serve up some fat underhanded pitches to hit out of the park.

Last month, eugenicist Margaret Sanger’s heirs revealed they had provided 11,000 additional abortions in the latest reported year: more than 330,000 pregnancy terminations, or a whopping one-third to one-half of those performed nationwide.  While offerings of breast exams and other cancer screenings and prevention procedures, well-woman exams and even birth control information plummeted — and government funding at all levels increased a sizeable $20 million to nearly $568 million.

There’s more. Recent antics of Planned Parenthood’s allies have revolted the civilized population of America. New York progressives all but danced in the aisles as Democratic Governor Andrew Cuomo signed legislation seemingly allowing virtually unrestricted abortion up to the moment of birth.

A Virginia Democratic legislator admitted a bill she introduced would sanction the killing of a fetus even as a woman entered labor.  And the Old Dominion’s Democratic (notice a pattern here?) chief executive, Ralph Northam — bought and paid for by $3 million in campaign cash from, you guessed it, Planned Parenthood — clumsily implied the law would enable babies’ lives to be snuffed out after entering the world. (A horrific claim now eclipsed by a blackface yearbook photo.)

Talk about “setting the table?” The former reality TV star couldn’t have lined up a better scenario for a border security-versus-baby killing funding battle if he had scripted it personally.

There are a couple of minor details to contend with: most of Planned Parenthood’s federal largess comes from a department that has already been funded.  And its affiliates would also be certain to run to various courts to claim the organization is being unconstitutionally singled out.

On cue, a group of antiabortion advocates has suggested in a letter to the president that “there are unilateral avenues that your Administration can follow to separate taxpayer funds from the nation’s largest abortion provider — in particular, Medicaid funds, which comprise 90 percent of Planned Parenthood’s federal funding.”  And this very month, a federal appeals court overturned an injunction against a Texas law withdrawing Medicaid funding for the organization.

It might just be time to test how eager Shutdown Nancy — who calls the idea of a border wall “immoral” —  would be to close the government again to protect an organization and party colleagues who favor annihilating babies in the birth canal.

Veto pen at the ready, the president would be much better positioned to trot out another Reagan one-liner at the prospect of an extended debate on the subject: “Go ahead. Make my day.”

Bob Maistros is president of RPM Executive Communications, Inc., which provides high-level message development, communications strategy and crisis support to firms ranging from the Fortune 500 to tech startups, and he is of counsel at the Alexandria, Va.-based Strategic Action Public Affairs. He was chief writer for the 1984 Reagan re-election campaign and also wrote for Sens. Charles Grassley and Orrin Hatch.

The views and opinions expressed in this commentary are those of the author and do not reflect the official position of The Daily Caller.

Previous Article
WOMAN WHO ACCUSED VA LT. GOV. JUSTIN FAIRFAX OF SEXUAL ASSAULT SPEAKS OUT
Next Article
SENATE INTEL CHAIRMAN: ‘WE DON’T HAVE ANYTHING THAT WOULD SUGGEST THERE WAS COLLUSION’