MCCONNELL MAY SINK THE GREEN NEW DEAL IN ONE FELL SWOOP 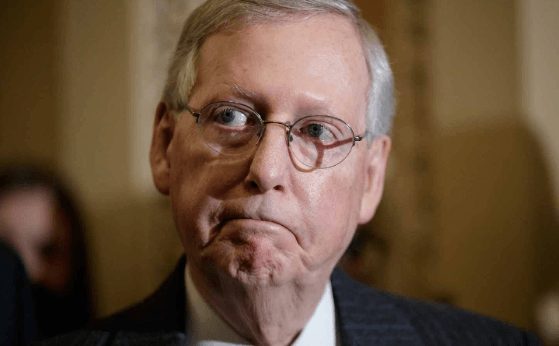 Senate Majority Leader Mitch McConnell is planning a move that could kill the Green New Deal — a vote on the proposal.

McConnell told reporters on Tuesday that he did intend to call for a vote, saying that he wanted “to see how [Senate Democrats] feel about the Green New Deal.”

According to The Washington Post’s Robert Costa, an aide to the Kentucky senator teased the possibility earlier in the day. “McConnell is considering taking up the green new deal for a vote in the Senate as a way to rattle Sen Dems, per a McConnell aide here at the Cap,” Costa tweeted on Tuesday.

McConnell is considering taking up the green new deal for a vote in the Senate as a way to rattle Sen Dems, per a McConnell aide here at the Capitol.

Republican South Carolina Sen. Lindsey Graham called for an “up or down” vote on the proposal last Friday, following a rollout so bungled that the FAQ website had to be temporarily taken down. (RELATED: Lindsey Graham Calls For A Vote On The ‘Green New Deal’ — But Not Because He Supports It)

“Let’s vote on the Green New Deal!” Graham tweeted. “Americans deserve to see what kind of solutions far-left Democrats are offering to deal with climate change.”

A vote right away would capitalize on the negative publicity and backlash that surrounded the proposal’s rollout, and would force prominent Democrats — several of whom have already announced that they plan to run for president in 2020 — to go on record as supporting the plan.

The Green New Deal has support from dozens of House Democrats along with most the Democratic Party’s quickly-expanding 2020 presidential field. Democratic Sens. Elizabeth Warren of Massachusetts and Cory Booker of New Jersey, who have both announced their bids for the 2020 nomination, have signed on as Senate co-sponsors of the Green New Deal.