THE DIFFERENCE BETWEEN NEWSWEEK’S REPORTING OF SMOLLETT HOAX VS. CONSERVATIVE STUDENT ATTACKED ON VIDEO 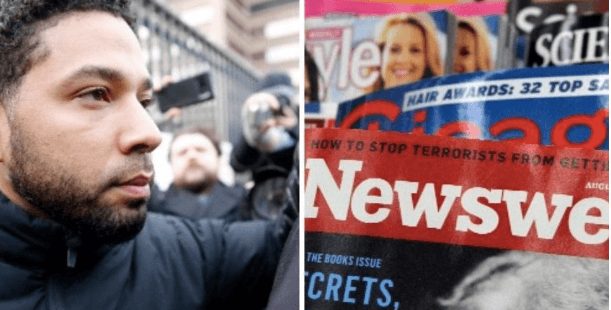 Newsweek’s initial coverage of the Jussie Smollett hate crime hoax and the alleged assault that took place Tuesday on UC Berkley’s campus drew skepticism Friday from many, though Newsweek defends its reporting as appropriately “cautious.”

Smollett alleged that two supporters of President Donald Trump assaulted him and poured a bleach-like substance on him while shouting racist and homophobic slurs last month. He was arrested for allegedly orchestrating the entire hoax earlier this week.

The way the article is written appears to confirm that the attack happened. The detail of the attackers screaming “praise to President Donald Trump,” however, was left as uncorroborated.

Now, the Chicago Police Department believes the entire attack was self-orchestrated by Smollett, and he has been charged with submitting a false report.

In another incident Tuesday, UC Berkeley student Hayden Williams, who is associated with the conservative activism group Turning Point USA, got into an altercation that ended with him being punched in the face. The second half of the incident was caught on camera.

Imagine if the attacker was wearing MAGA hat, would be national news!

This is the violent left!

The Newsweek article about the incident is titled, “Conservative Student Allegedly Assaulted At UC Berkeley While Recruiting Other Conservatives.”

The article, which was written by Scott McDonald, uses the word “allegedly” in the headline, despite the fact the article includes a video of the incident and a statement from the university police department.

“The suspect then knocked over the table the victim was at and the two men struggled over the phone. During the incident, the suspect punched the victim several times causing injury to the victim’s eye and nose,” reads a statement from the University of California Police Department, Berkley.

“I am comfortable with the cautious approach we took to both stories, although I agree that the shorthand ‘allegedly’ doesn’t provide sufficient nuance in many cases. By saying Smollett’s attackers were ‘allegedly’ praising President Trump, the reporter was trying to avoid characterizing the individuals or ascribing motive as a matter of fact,” Nancy Cooper, the editor in chief of Newsweek, told the Caller.

“As for the Berkeley story, we’ve seen examples — such as the Covington High School story — where a video clip appeared to tell one story that was contradicted by fuller video or later information,” she continued. “Especially in a headline, it was appropriate to be cautious. Newsweek’s editorial guidelines urge reporters to be conscious of any assumptions they may be conveying in their stories.”

The article itself, however, only used the word “alleged” once, and it was not in regards to the incident from earlier this week.

Previous Article
SANCTUARY LAWS ALLOWED ILLEGAL IMMIGRANT WHO TRIED TO KILL A COP REMAIN IN THE US, ICE CLAIMS
Next Article
CEO OF TIME’S UP RESIGNS AFTER SON INVOLVED IN SEXUAL MISCONDUCT