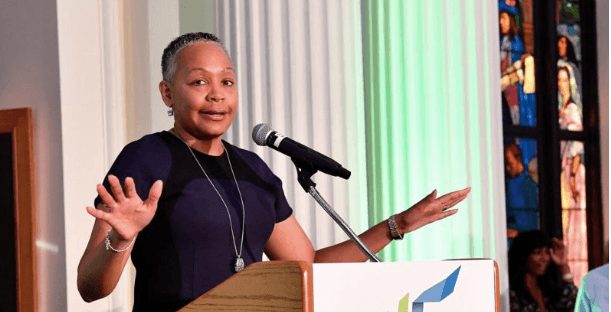 Lisa Borders, chief executive of the Time’s Up organization against sexual harassment, stepped down as President and CEO  Monday, Feb. 18, amid sexual misconduct allegations that were made against her son.

Time’s Up is a celebrity-backed organization founded in Hollywood to help rid the industry of workplace sexual assault and harassment. Lisa Borders started as CEO in November of 2018 after stepping down as President of the WNBA. (RELATED: WNBA Team Forfeits Game Because The Players Were Too Tired)

Borders and Time’s Up shared a joint statement on Twitter Friday. Borders stated, “Unfortunately, it is with deep regret that I must resign from Time’s Up to address family concerns that require my singular focus.”

Statement from Lisa Borders and TIME’S UP pic.twitter.com/Uo7MlDb8Op

On Thursday, the Los Angeles Times reported a woman accused Borders’ son, Gary “Dijon” Bowden Jr., of touching her inappropriately while working with him at her home on Jan. 21. Celia Gellert of Santa Monica said this incident took place during a “healing session.”

An unnamed source told the LA Times Borders’ “role as the president of Time’s Up was in conflict with being a mother who was taking active steps to defend her son. Lisa’s decision to step down was the right one for her, and for the organization.”

In their statement Time’s Up emphasizes survivors should “own their own story” and directs survivors to contact their legal defense team if they are experiencing sexual misconduct in the workplace.

Previous Article
THE DIFFERENCE BETWEEN NEWSWEEK’S REPORTING OF SMOLLETT HOAX VS. CONSERVATIVE STUDENT ATTACKED ON VIDEO
Next Article
DEMOCRATS TURN ON BERNIE: ‘HE IS NOT GOING TO BE THE NOMINEE’