OCASIO-CORTEZ FUNDRAISES OFF AIPAC, SAYS THEY’RE ‘COMING AFTER’ HER 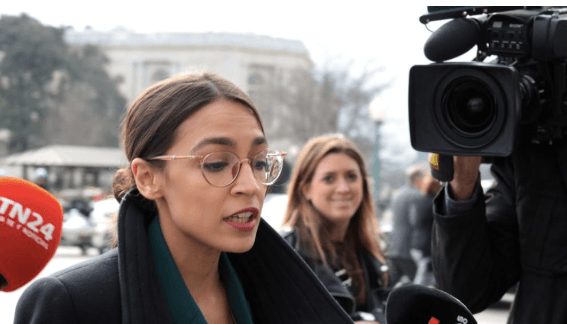 Democratic New York Rep. Alexandria Ocasio-Cortez sent out a fundraising email Thursday alleging that the American Israel Public Affairs Committee (AIPAC) was “coming after” her and some of her colleagues.

“‘[Alexandria Ocasio-Cortez, Rashida Tlaib, and Ilhan Omar] are three people who, in my opinion, will not be around in several years,’ — AIPAC activist,” the salutation of the email reads, which was first reported by Ben Jacobs of The Guardian.

The quote is from Stephen Fiske, an AIPAC activist, and it originally appeared in a New York Times article, “Ilhan Omar’s Criticism Raises the Question: Is Aipac Too Powerful?”View image on Twitter

And Alexandria Ocasio-Cortez is now raising money by saying AIPAC is coming for her and comparing the bipartisan consensus on the US-Israel relationship to the Iraq War.

“It’s official – AIPAC is coming after Alexandria, Ilhan, and Rashida,” it stated. “Rashida, Ilhan, and Alexandria have at times dared to question our foreign policy, and the influence of money in our political system. And now, lobbying groups across the board are working to punish them for it.”

“Some members of Congress have even gone so far as to claim that ‘questioning support for the US-Israel relationship is unacceptable.’ But that’s not how our legislative process is supposed to work,” the email added. “Just a decade ago, it was ‘unquestionable’ to not support the war in Iraq. And we all saw what resulted from that lack of discussion and negotiation.”

The fundraising email comes a couple weeks after Omar publicly accused AIPAC of buying congressional support for Israel. The comment was widely condemned by members of both parties and she ended up apologizing. (RELATED: America’s First Two Muslim Congresswoman Officially Endorse Anti-Israel Legislation)

Ocasio-Cortez and Tlaib have stood by Omar throughout multiple allegations of anti-Semitism levied against her after her criticism of AIPAC and for alleging that some members of Congress have “dual loyalties” to the United States and Israel.

AIPAC did not immediately respond to a request for comment.