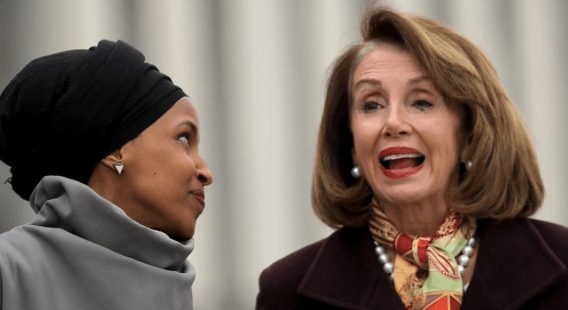 The Washington Post Magazine recently neglected to ask House Speaker Nancy Pelosi about either the accusations of anti-Semitism roiling the Democratic Party, or the backlash recently caused by Democratic Minnesota Rep. Ilhan Omar.

The Post Magazine’s wide-ranging interview, published Monday, covered everything from the potential impeachment of President Donald Trump to Twitter’s role in politics and the Green New Deal. But the magazine’s Joe Heim did not ask Pelosi about Omar’s implication two weeks ago that some members of Congress have a “dual loyalty” to the United States and Israel. (RELATED: Omar Facing More Accusations Of Anti-Semitism)

Though her comments sparked outrage from members of both political parties, including some calls for her removal from the House Foreign Affairs Committee, Omar did not formally apologize for them. The day after she stood by her comments, the House decided to draft a resolution condemning anti-Semitism. Despite getting delayed a day, the vote on the resolution was expected to take place last Wednesday, the same day as Heim’s interview.

Explaining why he never brought up Omar and anti-Semitism despite its prominence in the news cycle, Heim told The Daily Caller:

I tried to stay away from breaking news in the interview because the magazine piece wasn’t scheduled to run for a few weeks after the interview took place. We have to do the interviews well ahead of [publication] date and any specific questions about breaking news would be old news by the time the piece runs. The Rep. Omar story was also being covered pretty extensively by our Congress and other political reporters in real time. But we realized following the interview that her comments about impeaching the president were news and that we had an obligation to get that out as soon as possible. We also didn’t want to get scooped on that. So we decided to publish the interview today even though it still won’t come out in print for a couple more weeks.

The House resolution ended up condemning all types of bigotry instead of specifically focusing on anti-Semitism, and passed 407-23, with all of the nays coming from Republicans.