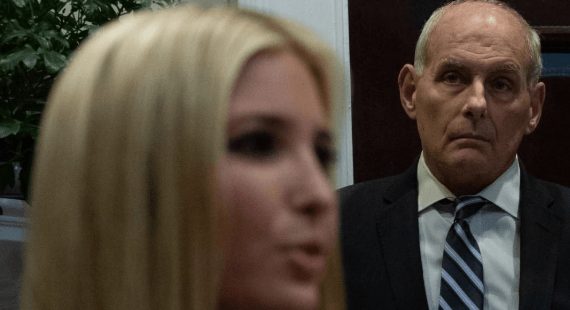 President Donald Trump instructed Chief of Staff John Kelly to fire his daughter and son-in-law from their White House positions, according to new book.

HuffPost editor Vicky Ward alleges in “Kushner Inc.” that the president was looking for ways to rid the White House of his daughter, Ivanka Trump, and his son-in-law, Jared Kushner because they were a source of constant negative press. When Trump selected Gen. Kelly to be his chief of staff in July, one of his first directives was for Kelly to fire his children.

“Get rid of my kids; get them back to New York,” Trump allegedly told Kelly.

Trump also reportedly complained that his children “didn’t know how to play the game,” referring to their seeming inability to generate positive media coverage for the administration.

According to Ward, Kelly informed Trump that it would be difficult to fire his own children, so the pair agreed they would make life so difficult for Ivanka and Kushner in the White House that the couple would be forced to resign.

WASHINGTON, DC – MARCH 06: President Donald Trump shakes the had of his daughter and advisor, Ivanka Trump during a meeting with the American Workforce Policy Advisory Board inside the State Dining Room of the White House on March 6, 2019 in Washington, DC. The board, co-chaired by Ivanka and Commerce Secretary Wilbur Ross, is tasked with developing a strategy to revamp the U.S. workforce for well-paid, in-demand jobs and with promoting private-sector investments in workers. (Photo by Tom Brenner/Getty Images)

Kelly instead announced his own resignation in December before the alleged plan could succeed. (RELATED: Trump Says John Kelly Is Leaving The White House)

Both children currently serve as advisers to Trump, and Kushner has been tasked with diplomacy in the Middle East, while Ivanka Trump has focused on advancing paid family leave policies. Ivanka has been credited for spearheading programs that aim to “empower women in the workplace,” while her husband has been involved in the administration’s criminal justice reform measures.

The Kushner camp has pushed back on Ward’s book, calling it a piece of “fiction.”

“It seems she has written a book of fiction rather than any serious attempt to get the facts,” a spokesman for Kushner said. “Correcting everything wrong would take too long and be pointless.”

The White House provided the following statement from Press Secretary Sarah Sanders to The Daily Caller:

“It’s sad, but not surprising, the media would spend time promoting a book based on shady anonymous sources and false information instead of all the incredible work Jared and Ivanka are doing for the country. The author, on her own website, listed this book in the category of ‘fiction’ – until recently changing it. Her initial representation was accurate.”