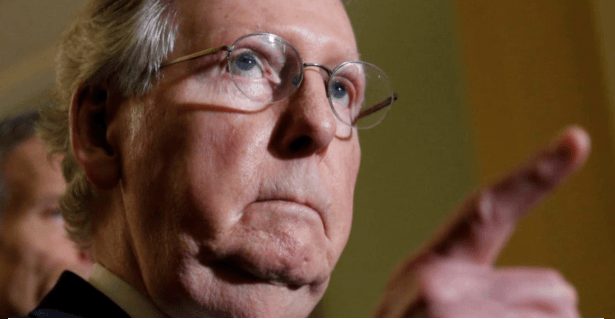 Senate Majority Leader Mitch McConnell described the Green New Deal as a job-killing socialistic takeover of the American economy hours before his colleagues prepare to vote against the ambitious climate change proposal.

“[M]y Democratic colleagues’ rallying cry: Killing off entire domestic industries. Winding down millions of jobs. Basically outlawing the only sources of energy that working-class and middle-class families can actually afford,” McConnell wrote Tuesday in a Twitter thread hours before the Senate is slated to vote on the GND, a proposal designed to put an anti-fossil fuel agenda into hyper-drive.

New York Rep. Alexandria Ocasio-Cortez and Massachusetts Sen. Ed Markey, both Democrats, became the subject of criticism after they introduced the GND in February following intense media attention on the deal.

The Green New Deal, my Democratic colleagues’ rallying cry: Killing off entire domestic industries. Winding down millions of jobs. Basically outlawing the only sources of energy that working-class and middle-class families can actually afford.

McConnell has sharpened his attacks against the proposal in recent weeks. “It’s remarkable to see a party coalesce around a proposal to forcibly remake the entire country on the whims of Brooklyn and San Francisco,” the Kentucky Republican said in a follow-up thread Tuesday. “But it’s been even more stunning to see my Democrat colleagues angry and upset that the plan they support is about to get a vote.”

The Green New Deal has support from dozens of House Democrats along with most the Democratic Party’s quickly-expanding 2020 presidential field. Democratic Sens. Elizabeth Warren of Massachusetts and Cory Booker of New Jersey, who have both announced their bids for the 2020 nomination, have signed on as Senate co-sponsors of the proposal.