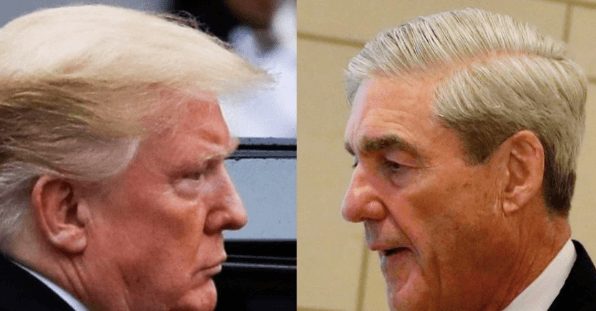 President Donald Trump trumpeted special counsel Robert Mueller’s finding of “no collusion” between his 2016 campaign and the Russian government, at a 2020 campaign rally in Grand Rapids, Michigan.

“After three years of lies and smears and slander, the Russia hoax is finally dead. The collusion delusion is over,” Trump declared, adding, “Total exoneration, complete vindication.”

Trump joked that “Robert Mueller was a god to the Democrats” while he was investigating his campaign and administration, but after the end of his report that “they don’t like him so much right now.” Trump cast the entire Mueller investigation and Democratic support as efforts to delegitimize his election in 2016 and seize power illegally.

Trump also coined a new nickname for House Intelligence Committee Chairman Adam Schiff, whom he called “pencil neck” and claimed “he has the thinnest neck I’ve ever seen.”

US President Donald Trump gives a thumbs-up as he walks from Marine One upon arrival on the South Lawn of the White House in Washington, DC, January 7, 2018, after spending the weekend at Camp David, the Presidential retreat in Maryland. Getty Images / AFP PHOTO / SAUL LOEB

“This is nothing more than a sinister effort to undermine our historic election victory and to sabotage the will of the American people,” Trump said. “The Russia witch hunt was a plan by those who lost the election to try to illegally regain power by framing innocent Americans, many of them […] They wanted to destroy the movement like our country has never seen before.”

Mueller delivered his final report to Attorney General Bill Barr after 675 extraordinary days of appointment, during which he sought to review any potential contact between Russia and the Trump campaign. The investigation became a sprawling review and led to the indictment of several in Trump’s orbit. (RELATED: Justice Department Delivers Mueller Conclusions To Congress, Determines No Collusion)

Barr informed Congress on Sunday about Mueller’s finding, saying, “The investigation did not establish that members of the Trump campaign conspired or coordinated with the Russian government in its election interference activities,” and that the report “does not conclude that the President committed a crime,” but “it also does not exonerate him.”