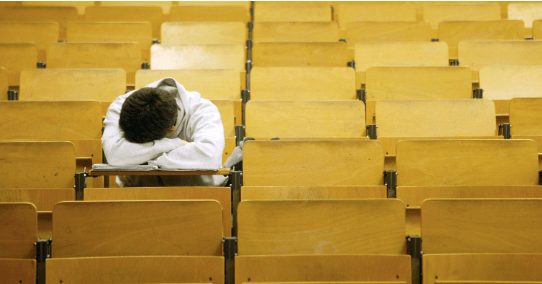 Politicians are demanding New York City’s most elite high schools alter their admissions processes to make it easier for black and Hispanic students to be enrolled.

The New York Times recently published an article about the underrepresentation of black and Hispanic students at New York City’s most elite private secondary schools titled “Only 7 Black Students Got Into Stuyvesant, N.Y.’s Most Selective High School, Out of 895 Spots,” which caught the attention of many big names in media and politics.

New York Democratic Rep. Alexandria Ocasio-Cortez responded to the article on Twitter, saying, “68% of all NYC public school students are Black or Latino. To only have [seven] Black students accepted into Stuyvesant (a public high school) tells us that this is a system failure. Education inequity is a major factor in the racial wealth gap. This is what injustice looks like.”

68% of all NYC public school students are Black or Latino.

To only have 7 Black students accepted into Stuyvesant (a *public* high school) tells us that this is a system failure.

Education inequity is a major factor in the racial wealth gap. This is what injustice looks like.

Certain organizations, parents and student groups, however, argue that changing the admissions processes of these schools, which rely solely on Specialized High School Admissions Test (SHSAT) scores, denies other students their earned seats.

New York City’s decision to use SHSAT scores to make admissions decisions was originally put in place to avoid perception of discrimination and favoritism.

“In 1971, New York state mandated an admissions test to the city’s Specialized high schools to ensure meritocratic admission. Called the SHSAT, the test knows no race or ethnicity; privilege and wealth count for nothing. All that matters is each student’s own ability,” writes Wai Wah Chin, president of the Chinese American Citizen Alliance of Greater New York, in a New York Post op-ed.

“Because of this,” she continues, “a Holocaust refugee who arrived in America with no English, no wealth and no privilege could take the test two years later, enter Stuyvesant and go on to win the Nobel Prize in Chemistry in 1981. His name: Roald Hoffmann. . . . That’s the beauty of the SHSAT.”

But proposals by elite schools and cities like New York to offer exclusive assistance to predominantly black and Hispanic students in an attempt to further integrate their schools has led to a lawsuit arguing that this assistance takes earned opportunity away from students who do the studying — specifically, Asian-Americans.

De Blasio’s and Carranza’s “Discovery program,” which was implemented in 2018, requires one in five open seats at Specialized schools to be filled by minority students who come from middle schools at which 60 percent of the population is poor. It also allows students from those middle schools who receive an SHSAT score below the minimum requirement to be accepted. Those students who score below the requirement then attend a summer program that “prepares” them for the school year.

The Plaintiffs in the suit, Christa McAuliffe PTO v. De Blasio, argue that the program cuts off schools with large Asian-American populations that fall just below the 60% economic index.

The Daily Caller spoke with Vito LaBella, president of the McAuliffe school PTO, who said the Discovery program “uses geography as a proxy,” putting many Asian-American students at a disadvantage. He also explained that McAcAuffie “has an economic need index of 58 percent,” which falls just below the index for middle schools from which Discovery program applicants are accepted.

The memorandum also argues that “under the Equal Protection Clause, this racial motivation and discriminatory effect shifts the burden to Defendants to prove that … the policy is narrowly tailored to further a compelling government interest. Any policy that intends to distribute benefits and burdens to favored and disfavored races must be subject to the most demanding standard of review.”

Attorney Wencong Fa. of the Pacific Legal Foundation, which represents families and Asian groups in the suit, explained to the Caller, “Believing there are too many Asians at the Specialized High Schools, Mayor De Blasio altered the qualification standards for the Discovery Program. As a result, middle schools with a large number of low-income Asian students were no longer allowed to send their children to elite high schools under the Discovery program.”

“A program that is created out of a discriminatory purpose and leads to a discriminatory effect is unconstitutional under the 14th Amendment,” he concluded. (RELATED: De Blasio Has A Plan To Diversify Elite Schools In NYC. Parents Are Suing)

In February, Judge Edgardo Romos ruled to deny a temporary injunction that would stop the Discovery program.

MSNBC anchor Stephanie Ruhle weighed in on the debate sparked by the New York Times article, saying, “This is actually tricky — admission to Stuyvesant is determined by a single test available to all middle school students in NYC. There are no soft criteria-no interviews, no legacy favoritism, no strings to be pulled. It’s all [about] test score which determines if you can handle academics.”

This is actually tricky –
Admission to Stuyvesant is determined by a single test avail to all middle school students in NYC.There are no soft criteria-no interviews,no legacy favoritism, no strings to be pulled. It’s all abt test score which determines if you can handle academics.

New York Times White House correspondent Maggie Habberman replied to Ruhle with, “White students generally have more means with which to prep for this test, some doing it for years. Yes it’s a test, no it is not an equal playing field.”

White students generally have more means with which to prep for this test, some doing it for years. Yes it’s a test, no it is not an equal playing field.

While Haberman is correct in mentioning that some students do have the means to hire tutors and pay for courses to prep for the SHSAT while other students do not, there are also a number of free test prep programsthroughout the city and online, library test prep books and free online practice tests, which can be just as effective.

Jon Valant, a fellow at the Brookings Institution’s Brown Center on Education Policy told NBC News, “When you send the message that only certain groups belong in those types of institutions, that only certain people can ‘earn’ access, that’s a dangerous message to students of color and students in poverty who may feel left out. And it’s a dangerous message to the kids who make it into Stuyvesant. None of it is good for society.”

While Ocasio-Cortez’s numbers are correct, she fails to mention that Stuyvesant high school’s Asian population makes up 73% of the school while they make up only 16%of the whole student population in New York City.

So, the question is: Does the call for more equality among black and Hispanic students put Asian students at an arbitrary disadvantage?

Peter Wood, president of the nonprofit higher education advocacy group National Association of Scholars told the Caller in a statement:

The mayor’s attempts to subvert these standards in favor of ethnic quotas and set-asides is a terrible idea.

… Being marked out as the lowest-performing subset of students in a rigorous academic program is not a path to either educational success or psychological well being.

… The low number of black students who scored high enough to win places in Stuyvesant reflects social realities beyond the proper reach of school admission standards. Those numbers probably reflect family structure and community attitudes more than any other factors.

Changing the culture behind those factors is difficult. Altering admissions standards will do nothing to repair the underlying problems and could, in fact, make them worse.

Some critics also argue that Mayor de Blasio should start from the bottom up rather than the top down. In other words, New York City should spend more time focusing on how to help black and Hispanic students achieve success from the start before they take the test required to gain admittance into the city’s Specialized schools, rather than try to tamper with the admissions process as a whole.

Wah Chin issued a statement saying, in part, ” … The [SHSAT] results show that after five years and the highest per-student spending in the world, [de Blasio] and his chancellor still fail to educate Black and Hispanic students so that they could excel at the SHSAT, an objective, scholastic and competitive test that over generations found top students of all skin colors, national origins, religions, and family status.”

The New York Post editorial board made a similar argument, writing in an op-ed: “Far too many city elementary and secondary schools that enroll mainly black and Hispanic kids are terrible. After all, the Department of Education doesn’t even dare enforce basic disciplinary standards. Which means that too many bright and academically deserving minority kids are blocked, not boosted, by a system that traps them in chaotic, dysfunctional classrooms.”

Some middle school students don’t even know the option to attend a Specialized school exists. One Stuyvesant graduate and current Harvard student, 18-year-old Venus Nnadi, said in an interview with The New York Times, “I had a lot of friends in my middle school who were just as smart as me, and who I know could be thriving at Stuyvesant if they had known it existed.”

After Judge Romos voted in favor of De Blasio’s Discovery program in the Christa McAuliffe PTO v. De Blasio case, Wah Chin called upon the mayor for change. As she concludes in her statement published in response to the ruling, “We call upon Mayor De Blasio and Chancellor Carranza to stop using race to cover up their failures. Their politics of division hurts children of all races. They should not peddle snake oil to the children of New York City, especially Black and Hispanic kids.”