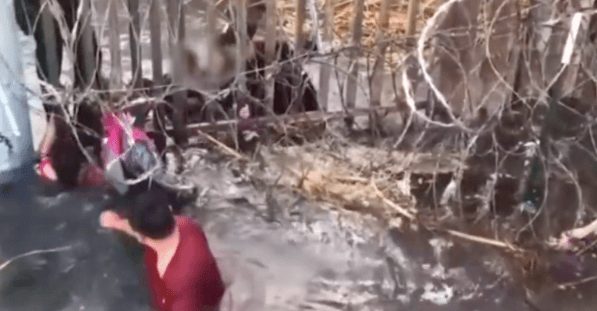 The recently released footage was taken on Dec. 18 and Dec. 22 within the Custom and Border Patrol’s (CBP) Yuma Sector in Arizona. On both days, agents filmed smugglers pulling families, including children, through razor wire laid across the U.S.-Mexico border.

Speaking in Spanish, an agent can be heard yelling “Don’t do that! Look at the child!” in the Dec. 18 clip. The smuggler can be seen pushing a young boy through a hole in the metal bollard wall and past a coil of razor wire. “Hey, careful! Careful with the boy!” the agent continues as sirens go off in the background.

The CBP footage is the latest to showcase the dangers into which foreign nationals put themselves and their children when attempting to illegally cross the U.S. southern border. As more family units attempt to enter the U.S., more stories of rescues are being released.

A Guatemalan woman and her three children, ages 2, 4 and 15, were found drowning on Thursday as they attempted to pass through the Rio Grande River. Border Patrol agents were able to reach the family on an airboat and pull them to safety before it was too late.

“Migrants continue to ignore the hazards and risk their lives attempting to cross the Rio Grande River,” Del Rio Sector Acting Chief Patrol Agent Louie W. Collins said in a statement. “Had our Border Patrol agents not been in the area to respond quickly, the woman and her children would have more than likely drowned.”

A CBP spokesman said rescues like the one on the Rio Grande are happening more frequently.

“Rescues by BP agents along the Rio Grande have increased dramatically in recent months,” Dennis Smith, a CBP spokesman stated to The Daily Caller News Foundation.

Not only are immigration enforcement officials dealing with a higher influx of migrants, but they are also contending with a much higher numbers of family units and unaccompanied alien children (UAC). (RELATED: The Trump Administration Is Expanding A Program That Boots Asylum Seekers Back To Mexico)

Nearly 100,000 apprehensions are expected to have taken place in March, which would be the highest number in over a decade. CBP Commissioner Kevin McAleenan stated that, of those apprehended in March, nearly 40,000 of them were children, leaving greater “potential for a tragic incident” to happen.