HERE’S WHAT WE KNOW ABOUT THE NOTRE DAME FIRE 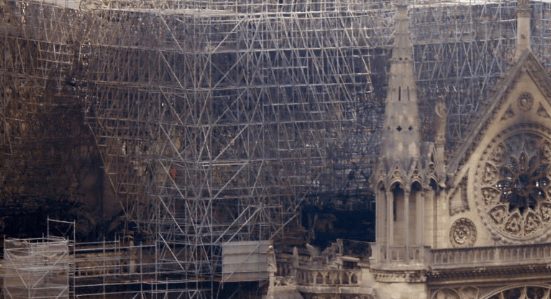 After the flames were dealt with, the church was left scarred, but most of it remained standing and appeared to be structurally sound, French officials told The New York Times.

The exact cause of the fire is still under investigation, but “nothing at this stage suggests a voluntary act,” Paris prosecutor Rémy Heitz said, according to TheNYT. The investigation into the fire involves roughly 50 investigators. (RELATED: People Fall To Their Knees In Prayer As They Watch Notre Dame Burn)

The fire destroyed the cathedral’s iconic central tower, added during the 19th century, which was under renovation. The fire also wiped out most of the church’s roof, which was covered in lead and supported by wooden beams, many of them from the original construction.

The fire left gaping holes in the cathedral’s vaulted ceiling. Most of the flammable objects in the church’s interior, such as the pews, pulpit and organ, appeared okay, as did the rose glass windows. The vaulted ceiling apparently kept the worst of the heat from destroying the vulnerable objects below, French officials told TheNYT.

An alarm bell first sounded in the cathedral during Monday mass at 6:20 p.m. local time. An inspection of the church did not reveal any fire and the assembled churchgoers were slow to react until a policeman told the priest that everyone must be evacuated, according to CNN.

At 6:43 p.m., a second alarm sounded. The onlookers could easily make out the fire by that point and firemen were rushing to the scene, though rush hour traffic slowed their response. Paris Mayor Anne Hildago posted a tweet soon after saying “a terrible fire is underway at Notre-Dame Cathedral.”

Roughly 500 firefighters eventually responded to the blaze that burned for roughly nine hours. The fire started in the worst location possible to be easily put out, McCrery told TheDCNF. The fire started around the church’s central tower and spread outward in all directions, fed by centuries-old dry wood.

Previous Article
HERE’S WHAT WE KNOW ABOUT THE NOTRE DAME FIRE
Next Article
DOES TRUMP HAVE THE LEGAL AUTHORITY TO SEND ILLEGAL IMMIGRANTS TO SANCTUARY CITIES?