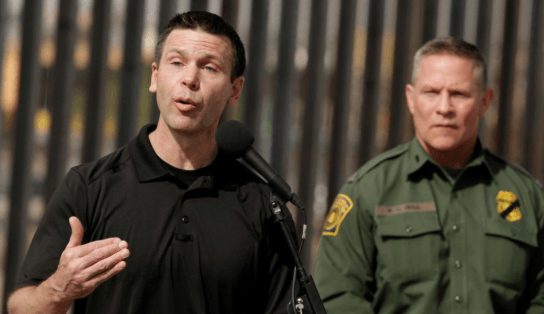 More than 3,000 fraudulent family cases have been identified by U.S. Border Patrol in the past six months, demonstrating the lengths to which illegal migrants will go to abuse U.S. laws.

“It’s very clear that the cartel and smugglers know the weaknesses in our laws. They know that family units and unaccompanied children will be released with no consequences for their illegal entries,” acting Homeland Security Secretary Kevin McAleenan stated when he visited the U.S.-Mexico border near McAllen, Texas.

McAleenan, who took over the role of DHS chief following Kirstjen Nielsen’s resignation, said Tuesday marked a new record in single-day border crossings, with over 4,800 people crossing in a 24-hour period. Nearly 1,000 of those apprehended on Tuesday came in just three big groups.

Thousands of families, the acting DHS chief said, have arrived at the border only to be discovered to be lying about their kinship. The department is now buckling down on migrant child recycling rings.

“The same child is brought across the border with an adult multiple times to try and gain that release that family units are required under court order,” he said.

The influx of fraudulent migrant families comes as border apprehensions continue to rise. Customs and Border Patrol (CBP) announced that 418,000 nationwide apprehensions have occurred this fiscal year to date, already beating the total number of apprehensions for the entire 2018 fiscal year. A vast number of these migrants are from Honduras, Guatemala and El Salvador, burdening U.S. immigration laws geared mostly toward Mexican nationals.

Many of the Central American migrants readily admit that they’ve been encouraged to make the trip to the U.S. border, and are told that bringing a child with them will increase their chances of being released into the interior of the country.

We’ve been told if you are a father you can bring your child and you will be helped here if you’re in that situation,” said a Guatemalan pastor who was apprehended at the Rio Grande Valley. He claimed newspaper advertisements in his home country, with promises of jobs and U.S. government assistance, prompted him to make the journey.