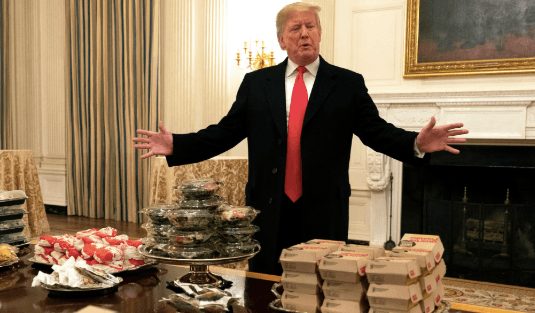 According to the Baylor team’s Instagram, the winning players were greeted with Chick-fil-A sandwiches, McDonald’s quarter pounders, Wendy’s burgers, and Burger King Whoppers.

The tradition of serving fast food to the championship athletic teams who visit the White House started during the partial government shutdown earlier this year. President Donald Trump personally paid to have an event with the Clemson Tigers’ national championship-winning college football team catered with various fast food items. White House press secretary Sarah Sanders noted that much of the White House’s residence staff was furloughed at the time, making the logistics of internally catering the event rather difficult. (RELATED: Trump Gets Clemson Football Team Fast Food)

Some members of the media mocked the decision to serve the players hamburgers, fries and pizza, but rather than shying away from the criticism, the president embraced his unique catering option.

The president praised Baylor’s nail-biter national title game against Notre Dame University during the team’s trip to the Oval Office.