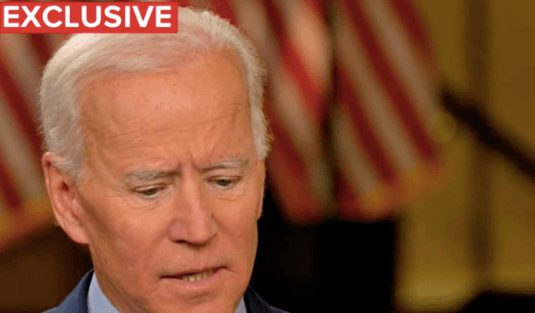 Former Vice President Joe Biden said Monday that he takes personal responsibility for Anita Hill’s treatment during Justice Clarence Thomas’s 1991 confirmation hearings, amid mounting criticism from the left and Hill herself about the inadequacy of past apologies.

Monday’s statement marks a substantive shift for the Democratic presidential candidate, who has expressed regret to Hill in general terms but declined to hold himself personally culpable for an episode that inflamed much of the country.

“I apologized for it,” Biden said elsewhere in the interview. “I apologize again because — look, here’s the deal — she just did not get treated fair across the board. The system did not work.”

Biden struck a different note before Monday’s interview. Appearing Friday on “The View,” Biden accused Republicans of unfairly smearing Hill while insisting he did not personally mistreat her.

The Hill hearings present a serious quandary for the former vice president, in that he has little to gain by relitigating past events that deeply divide the electorate. Though public opinion strongly favored Thomas’s confirmation even after Hill’s testimony, today she is cast as a feminist forerunner properly thought of as the “Me” in #MeToo. As Biden’s own counselors have conceded, he is unlikely to mollify left-wing critics of his conduct as chairman.

“Those who are attacking him about this are not going to change their minds about him,” Biden advisor Anita Dunn said.

Dangers are similarly acute on the right, where Thomas remains a beloved, ecumenical figure. As progressives have panned Biden’s performance, conservatives have come to the justice’s defense, reviving questions about Hill’s credibility. Citing passages from the late Sen. Arlen Specter’s memoir, The Federalist reports that Biden himself had misgivings about portions of Hill’s testimony.

Thomas dealt harshly with Biden in his 2008 memoir, “My Grandfather’s Son.” The justice wrote that he spoke by phone with Biden after Hill’s accusations were privately relayed to the Judiciary Committee. During that conversation, Thomas says Biden promised to be his “biggest defender” if the allegations were ever publicized.

“Senator Biden’s smooth, insincere promises that he would treat me fairly were nothing but talk,” Thomas wrote.