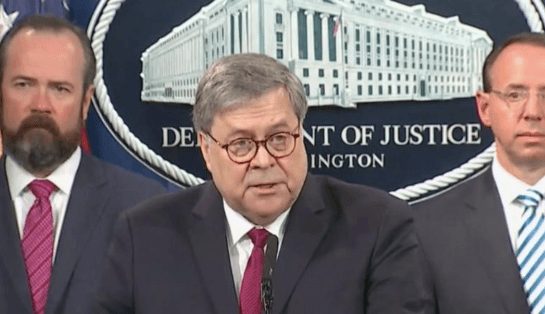 The letter, which is dated April 19, one day after the special counsel’s redacted report was released publicly, expresses deep concerns about Mueller’s failure to reach a conclusion on obstruction of justice and his assertion that the report does not exonerate President Donald Trump.

The Mueller report claimed, “The evidence we obtained about the President’s actions and intent presents difficult issues that prevent us from conclusively determining that no criminal conduct occurred. Accordingly, while this report does not conclude that the President committed a crime, it also does not exonerate him.”

As Emmet Flood, the president’s special counsel, explains, Mueller is not in a position to “conclusively [determine] t

“Making conclusive determinations of innocence is never the task of the federal prosecutor,” Flood wrote to Barr. “What prosecutors are supposed to do is complete an investigation and then either ask the grand jury to return an indictment or decline to charge the case.”

Flood continued, “In the American justice system, innocence is presumed; there is never any need for prosecutors to ‘conclusively determine’ it. Nor is there any place for such a determination.”

Flood went on to slam Mueller for declining to reach a conclusion on obstruction of justice, arguing that failing to do so violates the investigation’s obligation to make a prosecutorial decision.

“The one thing the SCO (Special Counsel’s Office) was obligated to do is the very thing the SCO — intentionally and unapologetically — refused to do. The SCO made neither a prosecution decision nor a declination decision on the obstruction question,” he said.

Barr told Congress on Wednesday that he was surprised by the special counsel’s decision to leave the obstruction question up to the attorney general.

The letter also expressed concerns about criminal leaksrelated to the investigation. Barr revealed in his testimony to the Senate Judiciary Committee that the DOH has “multiple” criminal investigations underway regarding leaks.

On Tuesday, reports indicated that Mueller also complained to Barr about perceptions surrounding his report on the collusion investigation. Mueller claimed Barr’s letter on the principal conclusions of the report “did not fully capture the context, nature and substance” of his investigation, although Mueller declined to say anything within Barr’s letter was inaccurate. (RELATED: Mueller Expressed Frustration To AG Barr)