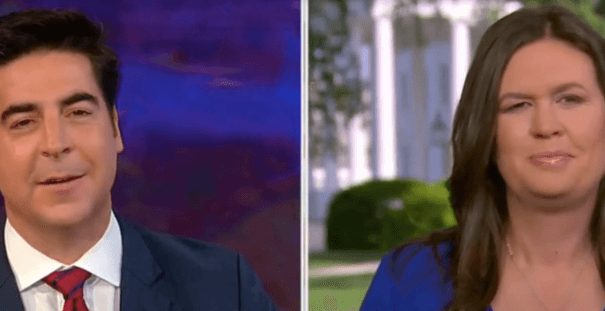 White House press secretary Sarah Sanders reacted to a viral moment at President Donald Trump’s Wisconsin rally late last month, when the president called her to the stage then pretended to fire her as she left.

The press secretary’s comments came during a wide-ranging Saturday evening conversation with Fox News host Jesse Watters. After touching on several topics including the left going “nuts” and Attorney General William Barr’s refusal to testify, Watters played a clip from late April, when Trump called Sanders to the stage during a Wisconsin rally.

“Better be careful, Sarah!” Watters said. “You gotta be very careful!” (RELATED: April Ryan Takes Heat For Saying Sarah Sanders’ Head Should Be ‘Lopped Off,’ Then ‘Plays The Victim’)

“I’m taking a step back,” Sanders said, laughing. “But thankfully, the president has a great sense of humor and was just kidding. And when I showed up on Monday, I still had a place here at the White House and I couldn’t be happier. I love working for the president. I’m really proud to get to do that and proud of everything he’s doing. I think he has a great story to tell and I’m glad to be a little part of it.”

“Try not to get fired!” Watters joked as he ended the interview.