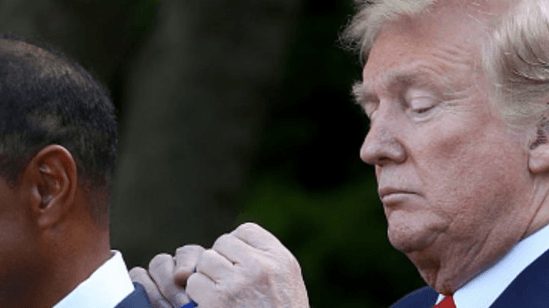 President Donald Trump awarded an emotional Tiger Woods the Presidential Medal of Freedom on Monday during a ceremony in the Rose Garden.

Woods became the fourth golfer ever to receive the honor, along with Arnold Palmer, Jack Nicklaus, and Charlie Sifford. Woods held back tears during the ceremony, where Trumppraised him as a “global symbol of American excellence, devotion, and drive.”

Widely considered the greatest golfer of all time, Woods won his 15th major championship at “The Masters” last month, his first major win in 11 years. Woods’ latest triumph came after years of personal and physical struggles that saw him plummet from the top of the sport to near irrelevance. (RELATED: Trump Golfs With Tiger Woods, Jack Nicklaus In Florida)

Trump announced the day after the tournament that he would be awarding Woods the honor because of his “incredible Success & Comeback in Sports (Golf) and, more importantly, LIFE.”

Trump and Woods have known each other for years and have golfed together frequently in the past. When pressed by reporters following a tournament last year, Woods defended his relationship with the president, saying, “Well, I’ve known Donald for a number of years. We’ve played golf together and you know we’ve had dinner together. And so yeah, I’ve known him pre-presidency and obviously during his presidency.”