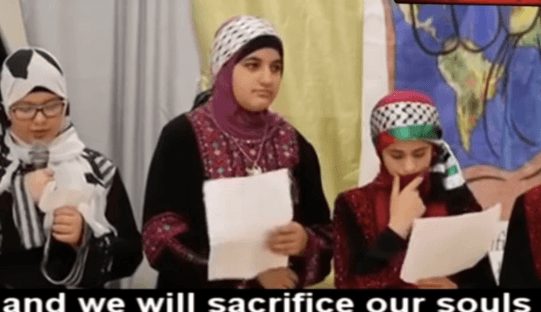 The Muslim American Society pledged Friday to investigate a videoed incident of children at its Philadelphia Islamic center singing about conquering Jerusalem and beheading people.

The Muslim American Society (MAS) Islamic Center in Philadelphia initially posted video of the children adorned in Palestinian scarves singing in celebration of “Ummah Day” in April, but translation by the Middle East Media Research Institute (MEMRI) revealed the threatening nature of their lyrics.

The Washington, D.C.-based MAS claimed the Philadelphia center simply failed to properly vet the songs and that they would investigate the incident following public outcry on social media after Fox News reported it on May 3.

“We will defend the land of divine guidance with our bodies, and we will sacrifice our souls without hesitation,” one girl says in the video. “We will chop off their heads, and we will liberate the sorrowful and exalted Al-Aqsa Mosque. We will lead the army of Allah fulfilling His promise, and we will subject them to eternal torture.”

The MAS issued a statement Friday apologizing for the songs, claiming the incident was “an unintended mistake.”

“While we celebrate the coming together of different cultures and languages, not all songs were properly vetted,” the statement read, according to The Philadelphia Inquirer. “This was an unintended mistake and an oversight in which the center and the students are remorseful. MAS will conduct an internal investigation to ensure this does not occur again.”

The statement appears to have since been removed from both the organization’s website and its Facebook page.

“These are not isolated incidents; they are happening in major centers of the country – including in Pennsylvania,” MEMRI said in a statement to Fox News.Follow Joshua on TwitterSend tips to joshua@dailycallernewsfoundation.org.