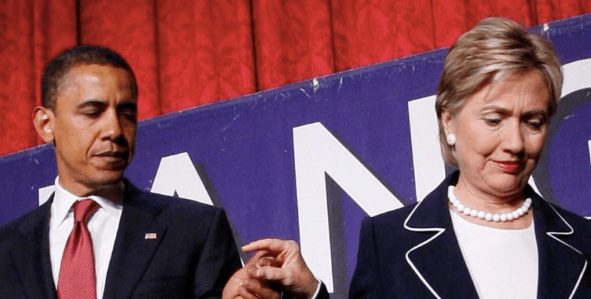 The Obama White House kept tabs on a Freedom of Information Act (FOIA) request for information on former Secretary of State Hillary Clinton’s email accounts that the State Department improperly denied, according to newly released emails.

The emails, which were provided to Judicial Watch, show for the first time that the Obama White House was aware of the Clinton-related FOIA request, which the liberal watchdog group Citizens for Responsibility and Ethics in Washington (CREW) submitted to the State Department in December 2012.

The State Department denied the request in May 2013, claiming that no responsive records existed. That despite officials at the State Department, the White House and even President Obama himself knowing that Clinton used a personal email account for government business.

It is not clear from the emails why the White House was interested in the request. But Judicial Watch president Tom Fitton has a theory.

“These documents suggest the Obama White House knew about the Clinton email lies being told to the public at least as early as December 2012,” he said in a statement.

Several FOIA requests were filed for information on Clinton’s email accounts during her tenure at the State Department, which ended Feb. 1, 2013. The most specific request was the one from CREW, which was submitted on Dec. 6, 2012.

A day after the CREW request was submitted, a FOIA official at the State Department notified two of Clinton’s top State Department aides, Cheryl Mills and Heather Samuelson. Both Mills and Samuelson communicated with Clinton directly on her personal email account.

The first indication of White House involvement is found in a Dec. 20, 2012 email sent out by the State Department’s top FOIA official.

WH called – have we received a FOIA request from CREW (Citizens for Responsible Ethics in Washington) on the topic of personal use of email by senior officials? Apparently other agencies have. If we have it, can you give me the details so I can call the WH back? I think they’d like it on quick turnaround.Thanks! Sheryl

Walter then emailed Samuelson notifying her of the FOIA request.

“As a practical matter given our workload, it won’t be processed for some months. Let me know if there are any particular sensitivities,” she wrote.

On Jan. 7, 2013, Walter set up a conference call with Samuelsonand another State Department official, Karen Finnegan, to discuss the FOIA request.

Three days after the conference call, on Jan. 10, 2013, Walter emailed Samuelson again asking if she had learned how other government agencies were responding to CREW’s FOIA requests.

“[D]id you ever get any intell [sic] re what other agencies are doing re this FOIA request that seeks records about the number of email accounts associated with the Secretary (but isn’t specifying ‘personal’ email accounts so we are interpreting as official accounts only),” Walter wrote.

“We are considering contacting the requester to find out exactly what it is they are looking for. Do you have any-concerns about that approach?”

Samuelson responded: “White House Counsel was looking into this for me. I will circle back with them now to see if they have further guidance.”

On May 10, 2013, the State Department responded to CREW saying that there were “no responsive records” for the request.

Samuelson and Mills would later direct the review of Clinton’s emails to determine which would be deemed related to State Department work. They gave 30,000 emails to the State Department on Dec. 5, 2014. The other 30,000 were deleted.

James Comey called Clinton’s use of a private server “extremely careless,” but decided not to recommend charges against the Democrat.

CREW did not file an appeal to the May 2013 FOIA denial, and the group has not commented publicly on the State Department’s rejection. That could be because the group came under the control of David Brock, a close Clinton ally, in 2014. (RELATED: David Brock’s CREW: A Watchdog That Doesn’t Bite)

Anne Weismann, who filed the CREW request, told The Daily Caller in 2015 that if she were still with the group, “I would have commented and probably expressed my great disappointment that the response was as inaccurate as it was.”