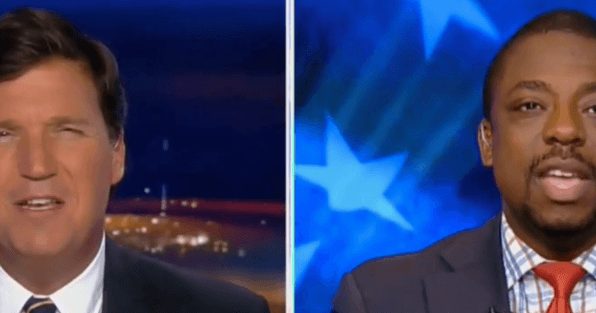 Carlson jumped right into the New York state Senate’s Wednesday passage of the TRUST Act, a bill that would facilitate the handing over of Trump’s state tax returns to Congress.

“But it’s bigger than just Trump, right?” Carlson asked. “Is there anything that should be private?”

Benjamin jumped into the legalese behind the congressional request, but Carlson wasn’t having it.

“You want to destroy somebody because you don’t like him, right?” he asked.

After a tense back-and-forth, Carlson brought up another issue to make a point. “You don’t want to help ICE keep the border secure, right? It’s a sanctuary state. But you will help the Congress pull a guy’s tax returns because you are facilitating an investigation? I mean, just be honest.” (RELATED: Tucker Asked Jorge Ramos How Many Caravan Migrants He Planned To Take In — Things Got Awkward Fast)

“I wonder, is anybody going to stop lying for like 10 seconds in the last year?” Carlson continued. “Just be honest and say, I don’t like the guy. I want to destroy him. I will do whatever it takes. I see that as my job, and if that means releasing his tax returns against his wishes, I will do that.”

“It’s congressional oversight over the executive branch,” said Benjamin. “If the Congress asks for his tax returns, — that is the law. All we are saying is we want to follow what the federal laws are …”

“You just want to follow the law, but not our immigration law,” Tucker pressed. “Are you for the fact it is a sanctuary state by the way? … Do you think that New York should help the feds enforce immigration law?”

“I think New York should be a sanctuary state,” Benjamin admitted.

Previous Article
OBAMA WHITE HOUSE TRACKED FOIA REQUEST FOR HILLARY EMAILS THAT WAS IMPROPERLY DENIED
Next Article
TRUMP ON PLEDGE TO NOT USE FOREIGN DIRT: ‘I DON’T NEED IT’