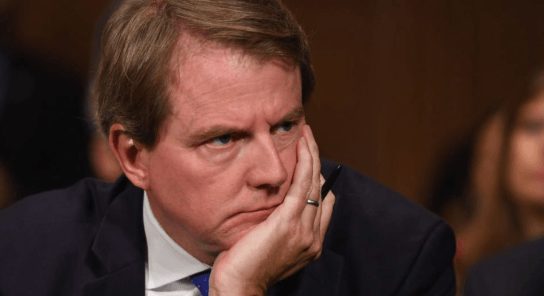 House Democrats issued a subpoena for public testimony and related documents from McGahn in April following the release of the Mueller report. House Judiciary chairman Jerry Nadler called McGahn a “critical witness to many of the allege instances of obstruction of justice and other misconduct” by the president. (RELATED: House Dems Subpoena Don McGahn Over Docs Related To Charge Trump Obstructed Justice)

The White House previously directed McGahn to withhold the relevant documents, and took a step further Monday by declaring the former official “immune” from testimony.

In a letter to Nadler, White House counsel Pat Cipollone cited a Department of Justice (DOJ) opinion indicating that Congress cannot compel senior advisers to the president to testify about their official duties.

“This testimonial immunity is rooted in the constitutional separation of powers and derives from the President’s independence from Congress,” Assistant Attorney General Steven Engel  wrote in his legal opinion. “We believe that these established principles apply to bar the Committee from compelling Mr. McGahn to testify.”

Cipollone echoed the DOJ in his letter, writing that McGahn is “absolutely immune” from testimony and thus “the President has directed Mr. McGahn not to appear.”

The directive from the White House is another blow to House Democrats, who have been seeking testimony from various Trump officials in an effort to bolster calls for impeachment.

In April, the White House ordered former official Carl Kline to avoid testifying about the administration’s security clearance processes without having counsel present. (RELATED: Trump Says White House Is ‘Fighting All The Subpoenas’)

“The Special Counsel received more than 1.4 million documents and hours and hours of interviews from White House officials, including more than 30 hours from former Counsel to the President, Don McGahn,” Sanders asserted. “The Democrats do not like the conclusion of the Mueller investigation – no collusion, no conspiracy, and no obstruction – and want a wasteful and unnecessary do-over.”