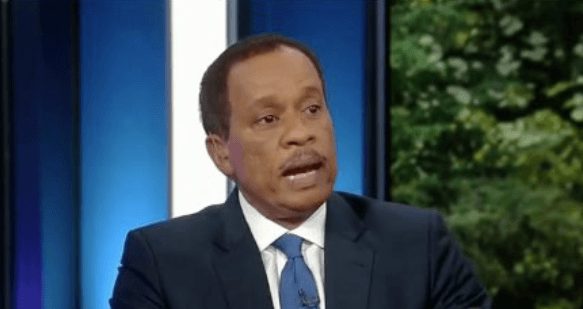 Fox News’ contributor Juan Williams faced backlash from the other hosts on The Five Tuesday, after calling President Donald Trump an “idiot.”

They were discussing Trump’s latest jabs at Democratic presidential candidate and former Vice President Joe Biden when Williams turned to conversation to Republican Michigan Rep. Justin Amash, who became the first GOP member to back impeachment, last weekend. (RELATED: Justin Amash Takes It On The Chin From Conservatives After Impeachment Stand)

“I think if we invited Donald Trump to the table to play poker with The Five, I’d take his money big time,” Williams stated. “It’s like a poker player and he keeps blinking. He’s like, ‘I know what’s going on.’ He thinks Joe Biden is a threat in Pennsylvania. That’s why he’s attacking Joe Biden like that. He’s not attacking Kamala Harris. He’s not going after anybody else. He’s going after Joe Biden, he’s going after the media sometimes.” (RELATED: Fox News’ Juan Williams: ‘You Can’t Trust The Zionists To Go After Tlaib’)

He went on, “He’s going after Justin Amash. Why? There’s a Republican whose finally saying it’s time to impeach this idiot. Yes, this is no coincidence.”

“He’s not an idiot, Juan,” Jesse Watters pushed back. “He’s the president of the United States.”

Greg Gutfeld chimed in to criticize Amash for failing to provide any evidence to back up his claim that Trump committed impeachable offenses.

Throughout his ten-tweet thread, Amash failed to provide specific details to back up his claims.