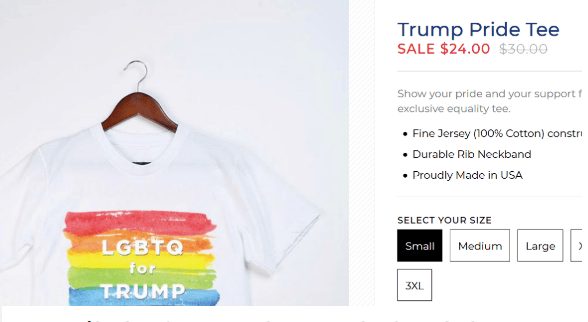 As recently as a decade ago it would have been unthinkable: a Republican president celebrating gay pride with an inclusive message for LGBTQ supporters. And just as unthinkable would be gay organizations denouncing that president’s embrace.

Yet that’s precisely what’s happened this week with the Trump Campaign’s unveiling of the “Trump Pride Tee,” a T-Shirt with rainbow stripes and the slogan LGBT FOR TRUMP.

“Show your pride and your support for Trump with this exclusive equality tee,” declares the campaign website, hawking the shirt for $24 alongside other T-shirt designs like Veterans for Trumpand Women for Trump that promote the president’s re-election campaign.

Gay activists expressed outrage in the last few days that the Trump campaign would welcome LGBTQ support while taking policy steps they reject. One opponent of the Trump Administration tweeted “This is probably the stupidest, most hypocritical, most ridiculous thing I have seen today.”

And the gay group GLAAD said on Twitter that “Trump should hold the sales pitch and try issuing a statement honoring June as National Pride Month and the countless of LGBTQ Americans who fought tooth and nail for the level of acceptance our nation sees today.” GLAAD pointed to what it said were 108 “policy and rhetoric” attacks on LGBTQ Americans. (RELATED: Trump — The Most Pro-Gay President In American History?)

The Trump Administration has made some moves to support the gay community, such as an initiative to oppose anti-gay laws worldwide. But it has also opposed transgender service in the military and reversed Obama initiatives on gender identity in schools and the reinterpretation of the 1964 Civil Rights Act.

Some gay Republicans were thrilled by the T-shirts. “I think it’s a wonderful step,” said Adam Savit, the president of Log Cabin Republicans-DC. “It reflects the fact there is real grassroots support for Trump among some segments of the LGBTQ community.”

Similarly, registered Republican Craig Shute, who did not vote for Trump, said “there are a lot of things to hate about Trump, but having queer supporters isn’t one of them.” He said gay groups were going to hate the president “no matter what he does” — for example, had he issued the pride month statement, they would accuse him of pandering.

Jerri Ann Henry, the Executive Director of Log Cabin Republicans, a gay group, took a more practical approach. While she called the sale of the T-shirt “a big deal,” she also said she hoped “it’s not just T-shirts. I hope that it’s real policy change because at the end of the day that’s what we all care about.”

The shirt was added to the Trump campaign store just in time for next month’s celebration of the 50th anniversary of the Stonewall riots, the event that sparked the gay liberation movement.

While the shirt would enable Trump supporters to display their politics at summer marches and rallies, some gays and lesbians may be more cautious for safety reasons. For example, Savit said that while he’d be working his group’s booth at next month’s DC pride festival, he wouldn’t wear an LGBTQ Trump T-shirt at the event because of the hostility and even physical assault he might face.