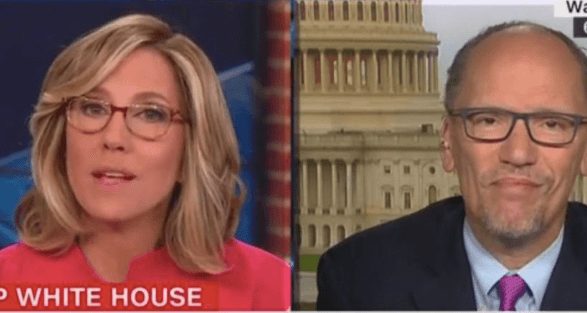 “Our fiercest foreign adversary attempted to interfere with our election to help Donald Trump and hurt Hillary Clinton,” he said Thursday on CNN’s “New Day.”

“We are at war right now,” Perez added. “It is a cyber war. Unfortunately because our commander in chief is compromised, the federal government is asleep at the switch. And that is why the DNC and others in the Democratic Party ecosystem are working tirelessly to make sure that we are protecting our data. We’re working with every campaign to provide cybersecurity training because we can’t expect help from this administration.”

Host Alisyn Camerota asked Perez if Democrats would use stolen information to even the score with Trump, and he said their findings would be the result of subpoenas.

When Camerota followed up about possible Democratic leaks, Perez did not give a direct answer. (RELATED: FBI Investigated Michael Flynn Over Russia Ties Earlier Than Previously Known)

“Maybe it’s going to be leaked. What if that’s leaked to you? Are you saying that the Democrats shouldn’t use that?” she asked.

“Well, again, we are entitled to that — if you look at the law that Chairman [Richard] Neal of the House Ways And Means Committee is using, it’s very clear. It doesn’t say you’re entitled to taxes unless it’s the taxes of the president of the United States,” he replied.

Content created by The Daily Caller News Foundation is available without charge to any eligible news publisher that can provide a large audience. For licensing opportunities of our original content, please contact licensing@dailycallernewsfoundation.org.TAGS : DEMOCRATIC NATIONAL COMMITTEEELECTIONS TOM PEREZ