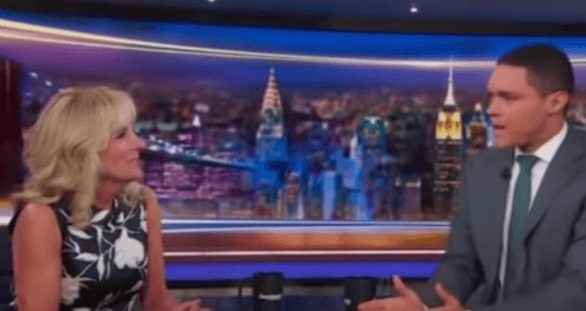 Former second lady Jill Biden promised an end to her husband Joe Biden’s alleged inappropriate behavior Wednesday during an appearance on The Daily Show. She also praised the “courage” of the women who made complaints against the former vice president.

“It took a lot of courage for women to step forward and say, you know, ‘You’re in my space. Joe heard that. And it just won’t happen again,” she told The Daily Show’s Trevor Noah. “He heard what they were saying.”

Former Democratic Nevada Assemblywoman Lucy Flores was the first of several women to accuse Biden of inappropriate behavior during a 2014 campaign event, although the former Bernie Sanders supporter later remarked that politics was the “impetus” for her decision to come forward. (RELATED: Which Democrat Can Beat Donald Trump In 2020?)

Jill Biden also discussed the thought process that went into her husband’s decision to launch a third bid for the White House this year, saying she and her husband initially decided against it, but were persuaded by family to run. The 76-year-old long-time senator and former vice president previously ran for president in 1988 and 2008.

“And we weren’t going to run, but then we kept hearing this,” Jill Biden said. “And so we started to think about it and then we called our family together, we spoke to our children, we got our grandchildren all together. And we said, what do you think? Do you think Pop should run for president? And to a grandchild they said Pop has to run.”

“He has to change the direction and bring people together and stop all this vitriol in this country,” she added.

While Joe Biden has made it a point to be less tactile on the campaign trail, he caused a stir earlier this week when he remarked on the looks of a 10-year-old girl, and put his hands on her shoulders.

“I’m going to write you a longer answer and tell you the exact things I would do, okay? Promise,” Biden said. “I’ll bet you’re as bright as you are good-looking. What your favorite subject?”

The former vice president is widely considered the front-runner for the Democratic nomination and has opened up massive leads in several polls since officially declaring his candidacy earlier this year.