PM THERESA MAY GIFTS TRUMP A DRAFT OF THE ATLANTIC CHARTER 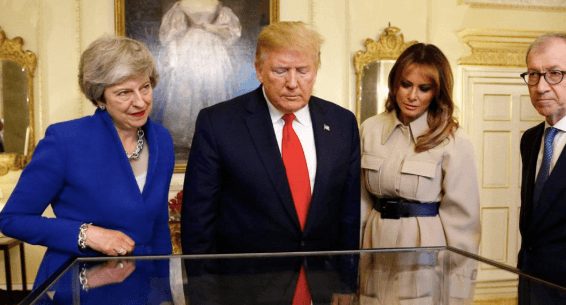 Trump met with May on Tuesday to discuss a potential trade deal, and May celebrated the visit by offering the president British PM Winston Churchill’s personal draft of the Atlantic Charter. (RELATED: The Queen Gives Trump And Melania Gifts During Their Visit To UK)

This is a copy of Churchill’s personal typescript draft of 1941’s Atlantic Charter – setting out his and President Roosevelt’s goals for a post-war world,” the official social media account for the prime minister’s office said.

The Atlantic Charter of August 1941 was a joint documentwritten by Churchill and then-U.S. President Franklin D. Roosevelt after a conference where the two leaders discussed their aims in the Second World War. While Churchill hoped his meeting with Roosevelt would convince the U.S. to enter the war, he settled for a joint declaration encouraging the British efforts and laying out certain conditions for a post-war world.

The charter is a fitting gift for the occasion, given the two leaders are commemorating the 75th anniversary of D-Day during the president’s visit.

Previous Article
HOW THE MEDIA COVERED UP THE REAL COLLUSION, BETWEEN RUSSIANS AND THE HILLARY CAMPAIGN
Next Article
GOP REPORTEDLY CONSIDERS DEFYING TRUMP ON MEXICO TARIFFS