FORMER ICE DIRECTOR TOM HOMAN: ‘IF I’M A TERRORIST … I WANT TO TAKE ADVANTAGE OF THE BORDER’ 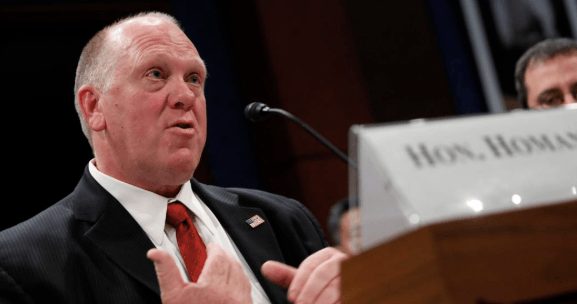 Former acting ICE Director Tom Homan said Monday that if he were a terrorist, he’d try to enter the country through the southern border on “Tucker Carlson Tonight.”

As Homan stated during his appearance on the nighttime show:

Here’s the tragic thing, if I’m a terrorist — I want to come into this country and do us harm — I’m not going to buy an airline ticket. There are too many checks, too many database checks before you get a ticket. I’m not going to get a visa because the security unit does numerous database checks before you get a visa. If I’m going to be a terrorist entering this country, I want to take advantage of the border now that’s in chaos and come across the border with 12 or 20 other million people came in this country.

“This is a national security crisis. God help us if the wrong people cross that border because of this chaos and this country will go to another 9/11. No one wants to talk about it but this border is vulnerable and it’s a real possibility,” he continued. (RELATED: Border Patrol Chief Agrees With Trump That There Is A Border Crisis)

Illegal immigration has risen since the beginning of 2019. April marked the second consecutive month during which monthly apprehensions at the border surpassed 100,000, a number that has risen every month this year. (RELATED: Trump Administration To Begin DNA Testing Migrants To Catch ‘Fraudulent’ Families’)

Homan has consistently been critical of Congress’s failure to pass legislation to fix what many have characterized as a crisis on the southern border. Last month, he suggested that Trump should avoid Congress when it comes to addressing the situation.