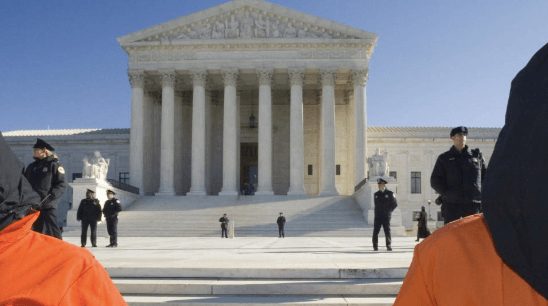 The Supreme Court rejected a challenge Monday to the indefinite detention of enemy combatants at the Guantanamo Bay prison camp in Cuba, as one justice warned that similar disputes will inevitably return to the high court.

Monday’s case involved a Yemeni national called Moath Hamza Ahmed Al-Alwi who has been held at Guantanamo Bay since January 2002. Al-Alwi, who was detained under the 2001 Authorization for the Use of Military Force (AUMF), says the government’s right to hold him expired with the end of combat operations in Afghanistan.

“Al-Alwi faces the real prospect that he will spend the rest of his life in detention based on his status as an enemy combatant a generation ago, even though today’s conflict may differ substantially from the one Congress anticipated when it passed the AUMF, as well as those ‘conflicts that informed the development of the law of war,’” Justice Stephen Breyer wrote in a statement respecting denial of review.

“I would, in an appropriate case, grant [review] to address whether, in light of the duration and other aspects of the relevant conflict, Congress has authorized and the Constitution permits continued detention,” Breyer added.

The Court did not give reasons for rejecting Al-Alwi’s petition, as is typical of orders of this nature.

Coalition forces captured Al-Alwi in December 2001 near the Afghanistan-Pakistan border. Though Al-Alwi has never faced charges or stood trial before a judicial tribunal, government lawyers told the justices in court papers that he is a confessed member of the Taliban who fought in a terrorist combat unit.

In a 2004 case called Hamdi v. Rumsfeld, the Supreme Courtsaid that the AUMF authorizes detention of enemy combatants for the duration of the war against Al Qaeda and its associated forces. In her opinion for a plurality of the Court, however, retired Justice Sandra Day O’Connor warned that the Court’s understanding of the detention power could “unravel” if the Afghan war evolved into an entirely new conflict. (RELATED: Justice Ginsburg Hints At Outcomes Of Supreme Court’s Biggest Cases)

Al-Alwi’s lawyers say O’Connor’s warning has come to pass — former President Barack Obama ended the U.S. combat operation in Afghanistan in 2014, and the current security agreement with the Afghan government limits the remaining American forces to a supporting role. Additionally, Al-Alwi stresses that Al Qaeda and the Taliban are no longer the principle enemy in Afghanistan. Instead, Afghan and coalition forces are battling a “collection of tribal and religious groups and alliances that has fragmented and morphed so often it is difficult to follow.”

“The time for the Court to impose limits on perpetual military detention has come,” Al-Alwi’s lawyers told the justices in legal filings.

“The lower courts’ failure to weigh properly how the current conflict differs from past conflicts that informed the development of the law of war creates the risk of lifelong detention for him,” they added.

The government counters that active hostilities continue in Afghanistan between the U.S., Al Qaeda and its allies.

“The record in this case also contains detailed declarations by senior military leaders describing military activities under Operation Freedom’s Sentinel and efforts by Al Qaeda, the Taliban, and associated forces to harm the United States,” the Trump administration told the justices.

There were 40 detainees at Guantanamo as of January 2019, according to Amnesty International. The case is No. 18-740 Al-Alwi v. Trump.