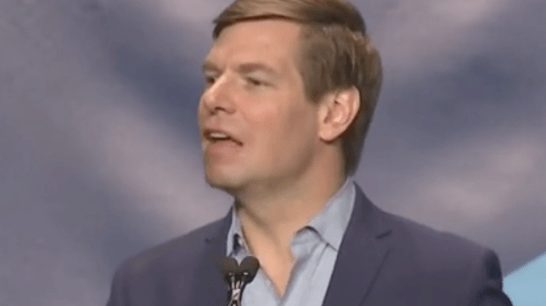 Democratic California Rep. Eric Swalwell claimed his place among superheroes like Marvel’s Avengers Sunday, saying that he and the other 2020 Democratic candidates were poised to save America.

Speaking in Cedar Rapids at the Iowa Democratic Party’s Hall of Fame event, Swalwell argued that the 2016 GOP primary was more like “The Hunger Games.”

“Thank you, Iowa. Congratulations to tonight’s honorees. Welcome to my fellow candidates,” Swalwell said as he walked onto the stage. “Whom I consider — we are all a part of being The Avengers. The Republicans in 2016, that was ‘The Hunger Games.’”

“We are in this with your help and support to save this country we love so much,” Swalwell continued, pointing out things that the Democratic Party had already done in pursuit of his stated goal. (RELATED: Gowdy: Swalwell Apologized For Being ‘A White Guy’ So He Could ‘Climb To 1% In The Polling’)

“I’ll tell you what you did, you cut our time in Hell in half,” he said, referencing the 2018 midterm elections and the fact that Democrats had regained the majority in the House of Representatives. “You gave us a shot to save the country. But I think it is time that we don’t just play defense, but we actually go on offense.”

Swalwell, who was born in Iowa, appeared to have difficulty connecting with the audience. In the most recent CNN/Des Moines Register poll of likely caucus-goers, he was one of nine Democratic candidates to poll at 0%.