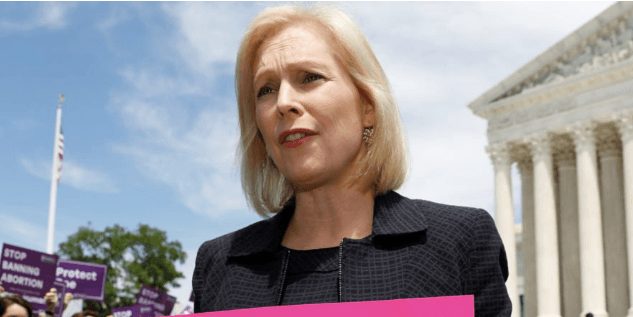 “I think there’s some issues that have such moral clarity that we have as a society decided that the other side is not acceptable,” the Democratic New York senator said, responding to a question about her views on appointing pro-life judges. “Imagine saying that it’s okay to appoint a judge who is racist or anti-Semitic or homophobic.”

The abortion debate is increasingly hot, as an increasing number of states move to impose severe restrictions on abortion. Alabama has effectively banned the procedure, which is expected to trigger a legal battle. Georgia, Kentucky, Mississippi, Louisiana and Ohio have recently passed fetal heartbeat laws that ban abortion after a heartbeat can be detected in the developing baby. Some pro-lifers hope to trigger a Supreme Court review of abortion precedent.

“Asking someone to appoint someone who takes away basic human rights of any group of people in America — I don’t think those are political issues anymore,” Gillibrand continued. She has called on the Democratic Party to purge itself of pro-life members. (RELATED: New York Times Trades ‘Fetal Heartbeat’ For ‘Embryonic Pulsing’ In Abortion Reporting)

She continued to defend her perspective by bringing up the Establishment Clause and Free Exercise Clause of the First Amendment of the U.S. Constitution, which establishes the separation of church and state:

We believe in this country in the separation of church and state. And I respect the rights of every American to hold their religious beliefs true to themselves, but our country and our Constitution has always demanded that we have a separation of church and state, and all these efforts by President Trump and other ultra-radical conservative judges and justices to impose their faith on Americans is contrary to our Constitution — and that’s what this is.

The Democratic Party has veered left on abortion, although polling suggests most Americans are moderate, somewhere between the staunch pro-life and staunch pro-abortion sides. A recent PBS poll found most Americans are opposed fetal heartbeat bans and are okay with women getting abortions at any time because of rape, incest or to protect the life of the mother. On the flip side, Gallup polling since 1976 has found the majority of Americans oppose unlimited access to abortion.