VIDEO SHOWS IRAN REMOVING A MINE FROM AN OIL TANKER, US SAYS 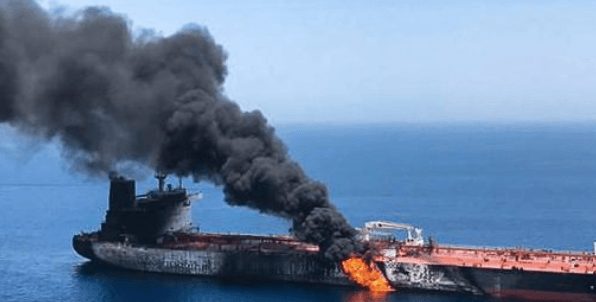 The U.S. military released video footage they say shows Iranian special forces removing an unexploded mine from an oil tanker after an attack Thursday.

President Donald Trump blamed Iran after two oil tankers were attacked in the Gulf of Oman Thursday. The U.S. says footage proves Iran was the perpetrator behind the attacks, but Iran said Friday that these accusations were “alarming,” and denied the allegations, according to the Washington Post.

The attack resulted in about a 4% increase in oil prices. Video footage shows Iran removing a mine from one of the oil tankers according to U.S. Centcom, but others have disagreed that the object is a mine. (RELATED: Here’s How Iran Would Carry Out A Plan To Disrupt Global Oil Trade)

An “IRGC [Islamic Revolutionary Guard Corps] Gashti Class patrol boat approached the M/T [motor tanker] Kokuka Courageous and was observed and recorded removing the unexploded limpet mine from the M/T Kokuka Courageous,” according to a Thursday statement from U.S. Centcom. The video shows people in a boat removing an object from the side of a tanker.

US Centcom published a statement claiming the following:https://www.navy.mil/submit/display.asp?story_id=109911&utm_source=twitter&utm_medium=social&utm_content=100000760787118&utm_campaign=Fight …

Along with the US Centcom statement the following video was published, claiming to show a IRGC Gashti Class patrol boat removing a unexploded limpet mine from the Kokuka Courageous https://www.youtube.com/watch?v=t5rZeMqvZ9g … pic.twitter.com/4Gxu9xUlu91075:39 AM – Jun 14, 2019Twitter Ads info and privacy48 people are talking about this

Yutaka Katada, the president of the attacked ship’s operator, Kokuka Sangyo, appeared to dispute the idea that the object was a mine.

“Our crew said that the ship was attacked by a flying object,” Katada said in an interview. “I do not think there was a time bomb or an object attached to the side of the ship.”

The boat in the video is similar to the one that Iran’s IRGC uses, according to analysis by Frank Gardner, BBC’S security correspondent. Multiple images appear to indicate that the vessel in the video is one of the vessels that the IRGC usually uses, shown in a Bellingcat Twitter thread.

Whether the removed object was in fact a mine remains unclear. Evidence was “circumstantial” according to Bellingcat. They also stated that Iran may have removed the object to investigate it, and that this doesn’t mean that they were definitely responsible.

Just published, the president of the operator of the Kokuka Courageous has stated the crew of the ship said “the ship was attacked by a flying object”, adding “I do not think there was a time bomb or an object attached to the side of the ship.”https://www.nytimes.com/2019/06/14/world/middleeast/oil-tanker-attack-gulf-oman.html?smid=tw-nytimesworld&smtyp=cur …‘Flying Object’ Struck Tanker in Gulf of Oman, Operator Says, Not a MineA Japanese company’s account of the damage to its ship differed from the explanation of American officials who blamed Iran.nytimes.com

And again, to be clear, there’s currently no evidence to verify what was removed from the side of the vessel was a mine, and there’s no evidence at the moment about who placed it there, so claiming it was a mine placed by the Iranians is pure conjecture at this point in time.3066:17 AM – Jun 14, 2019Twitter Ads info and privacy149 people are talking about this

Iran has placed the blame of the attack on someone looking to ruin Iran’s relations with other countries, BBC reported. Iran was also blamed in the attack by Secretary of State Mike Pompeo.

“It is the assessment of the United States government that the Islamic Republic of Iran is responsible for the attacks in the Gulf of Oman,” Pompeo told reporters according to The Daily Beast. “These unprovoked attacks present a clear threat to international peace and security, a blatant assault on the freedom of navigation, and an unacceptable campaign of escalating tension by Iran.”

Tensions between the U.S. and Iran have escalated in recent years after Trump abandoned a nuclear deal that developed under former President Barack Obama. The Trump administration has since placed sanctions on the Iranian government.

“Well, Iran did do it, and you know they did do it because you saw the boat,” Trump said on Fox & Friends Friday. “They didn’t want the evidence left behind. … It was them that did it.”

The M/T Kokuka Courageous crew abandoned their ship after they discovered a “probable unexploded limpet mine on their hull” after the explosion, the U.S. Centcom statement noted.