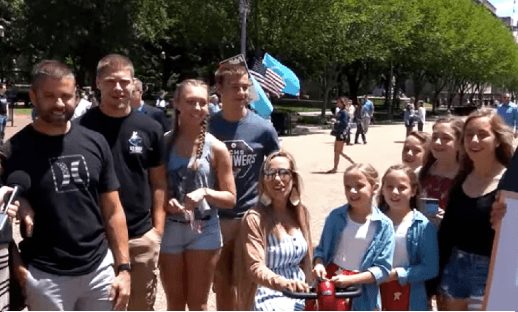 President Donald Trump’s 73rd birthday is Friday, and the people of Washington, D.C., complimented his looks, sang him happy birthday, and in some cases, had not-so-nice things to say on his special day.

Someone offered to buy him a new tie.

“I’m tired of seeing the same old tie, you know what I mean?”

Another even complimented the commander-in-chief’s “good looks.”

“Fuck Trump — that’s what I want to wish. Trump’s an idiot,” another person, not as much in the birthday spirit, said.

Two groups of people even sang “Happy Birthday” to a cardboard cut-out of Trump.

Watch and see what others had to say to the president on his birthday, and subscribe to The Daily Caller News Foundation’s channel to make sure you never miss out.

What Is The Biggest Threat To Gay Rights?