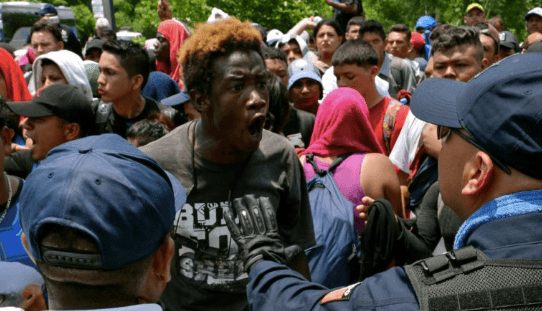 Hundreds of migrants who were part of U.S.-bound caravans carried serious criminal convictions, an internal investigation from the Department of Homeland Security (DHS) reveals.

Customs and Border Protection (CBP) and Immigration and Customs Enforcement (ICE), two agencies under DHS, conducted an investigation into two different caravans from Central America that were bound for the U.S. Their findings revealed hundreds of those individuals carried criminal histories, including murder, aggravated assault and sexual offenses. The figures specifically refer to criminal acts already committed in the U.S.

The discoveries were detailed in a letter from members of the House Committee on Oversight and Reform, and obtained by The Daily Caller News Foundation.

Out of the nearly 8,000 members within a caravan that reached south of California in October 2018, ICE Homeland Security Investigations found that 660 already had run-ins with the law in the U.S.

ICE Homeland Security Investigations also tracked a migrant caravan from Honduras in January 2019. Of the more than 3,300 individuals in the caravan, 860 were found to have criminal histories in the U.S., including 30 convicted of sexual offenses, 20 convicted of assault and aggravated assault and one convicted of attempted murder.

“These incidents are continuing,” the letter read. “CBP is currently monitoring another ‘movement of several groups ranging in size from 1,000 to 4,000’ in the Mexican states of Chiapas and Veracruz. The documents did not specify how many migrants are believed to have criminal records.”

FILE PHOTO: Central American migrants, moving in a caravan through Juchitan, Oaxaca are pictured atop a train known as “The Beast” while continuing their journey toward the United States, in Mexico April 26, 2019. REUTERS/Jose de Jesus Cortes

The new information comes as the Trump administration is preparing a massive operation to apprehend and deport “millions” of illegal immigrants living in the country. President Donald Trump announced the plan on Monday night, and ICE later confirmed it will be taking place. (RELATED: Study: The US Is No Longer The Top Destination For Refugees)

“At this point right now … we have really no other choice but to use our enforcement statutory authority to identify where these individuals are and remove them,” ICE Acting Director Mark Morgan said to reporters on Wednesday. “President Trump’s executive order has made it clear: No class of individual is exempt from our federal immigration statutes.”