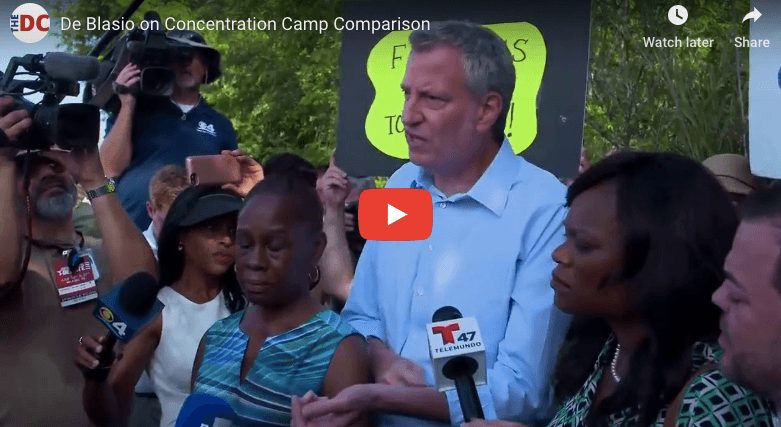 “No,” de Blasio quickly replied after a reporter asked if it was an appropriate comparison. “No, and I think we have to be very careful.”

The New York City mayor held an impromptu press conference Thursday after touring a facility in Homestead, Florida, that houses immigrant children. The visit came on the heels of the 2020 Democratic primary debate where he took the stage only a day earlier.

“I represent a lot of Holocaust survivors. I have constituents who still have the numbers on their arm from Auschwitz and other camps,” de Blasio continued. “No, this is not that. Those were death camps. Those were places unprecedented in human history.”

Ocasio-Cortez ignited a firestorm weeks earlier after she said during an Instagram livestream that the U.S. government is “running concentration camps on our southern border” to hold immigrants after they illegally enter the country.

“That is exactly what [holding facilities] are. They are concentration camps,” Ocasio-Cortezsaid at the time. “I want to talk to the people that are concerned enough with humanity to say that ‘Never Again’ means something. The fact that concentrations camps are now an institutionalized practice in the home of the free is extraordinarily disturbing and we need to do something about it.”

“Never Again” is the phrase Jews worldwide use to ensure that the extermination between 1939 and 1945 never happens again, and the phrase signaled she was referring specifically to Nazi concentration camps. (RELATED: Andrew Cuomo Slaps Down Ocasio-Cortez’s Concentration Camp Comparison: It’s ‘Wholly Inappropriate’)

The comments received massive backlash over their historical inaccuracy and insensitivity to the millions of Jews who were slaughtered in concentration camps during the Holocaust. Ocasio-Cortez initially doubled down on the claim and a host of liberals in the media tried defending the freshman congresswoman. However, after facing widespread criticism the freshman congresswoman denied she was ever referring Nazi concentration camps.

“This is a prison camp that’s wrong — it has to be ended,” de Blasio continued. “But we have to be very careful to state accurately what’s really going on.”