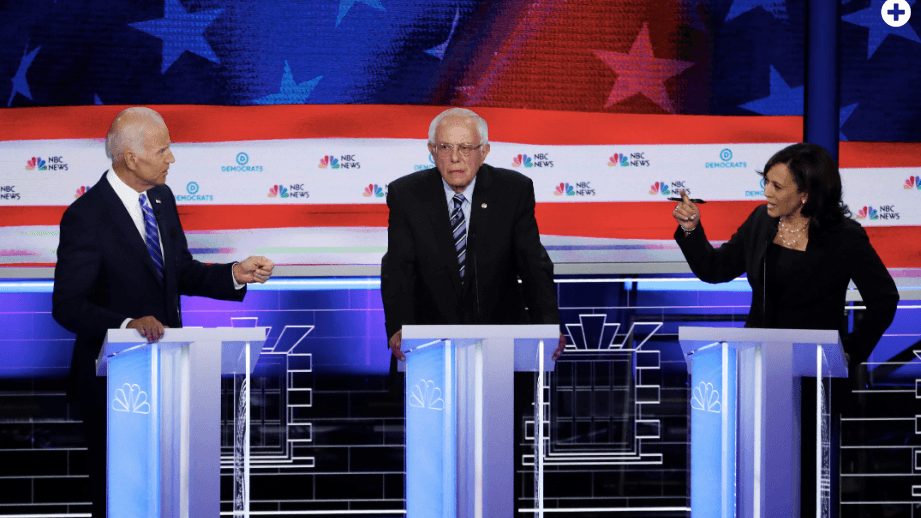 MIAMI — Former Vice President Joe Biden took a bit of a bruising in a raucous Democratic debate Thursday night in Miami, the second of two this week.

In one of the standout moments of the night, California Sen. Kamala Harris challenged him on race, nearing tears as she described her personal experience riding a segregated bus to school. It was one of several crowd-pleasing moments for Harris, who has struggled to gain any traction in the polls so far in her campaign. (RELATED: Democrats Push Immigration Policies That Amount To Open Borders In Second Debate)

In another rare moment for a politician, South Bend, Ind., Mayor Pete Buttigieg took responsibility for ongoing tensions between the black community in his city and the mostly white police force — you could hear a pin drop in the room. Other big moments included entrepreneur Andrew Yang struggling over a question about how he plans to pay for a $3.2 trillion giveaway, and self-help guru Marianne Williamson remarking in her closing statement that she is going to “harness love for political purposes.”

Harris won cheers from the audience and silence from the other candidates when she interrupted a shouting match over spending on education and Biden’s age between Buttigieg, Democratic Sen. Kirsten Gillibrand and Independent Sen. Bernie Sanders.

“Hey, guys, you know what?” she interjected forcefully. “America does not want to witness a food fight, they want to know how we are going to put food on their table.” She went on to talk about her position on the economy, concluding no American should have to work more than one job to put food on the table.

2. Yang tripped up over simple question on his plan to just hand out money

Yang prompted laughs when he missed a question by a debate moderator about his proposal to give every adult in the country $12,000 a year from the federal government.

“How would you do that?” the moderator repeated.

“Oh,” he said. “So it’s difficult to do if you have companies like Amazon, trillion-dollar tech companies, paying literally zero in taxes while they’re closing 30 percent of our stores.”

3. Everyone raises a hand for government insurance coverage of illegal immigrants

In a stunning moment, every single candidate on the stage raised their hands to signal support for a government-run universal healthcare system that would include coverage for illegal immigrants. The move was particularly notable for Biden, since former President Barack Obama made a point of assuring voters his health care plan would not cover illegal immigrants.

After Biden said he would decriminalize border crossings, along with every other candidate on stage except Colorado Sen. Michael Bennet, a moderator confronted him about the fact that he and the Obama administration deported more than 3 million illegal immigrants. He responded by saying Obama did a “heck of a job” on immigration and calling any comparison between Obama and President Donald Trump “immoral.”

“If they committed a major crime, they should be deported,” Biden said. “And the president was left in a — President Obama I think did a heck of a job. To compare him to what this guy is doing is absolutely I find immoral.”

He was given a pass by the moderators on the fact that he and Obama carried out similar child separation policies at the border.

Buttigieg won applause for saying Republicans who are okay with child separation at the border are all hypocrites and have no right to speak on religious grounds.

“We should call out hypocrisy when we see it,” he said. “A party that associates itself with Christianity, to say that it is okay to suggest that God would smile on the division of families at the hands of federal agents, that God would condone putting children in cages — has lost all claim to ever use religious language again.”

Former Colorado Gov. John Hickenlooper opened his part in the debate by warning the party against associating in any way with socialism, saying it’s not the solution to climate change or health care.

“The bottom line is, if we don’t clearly define that we are not socialists, the Republicans are going to come at us every way they can and call us socialists,” he said. “And if you look at the Green New Deal, which I admire the sense of urgency and how important it is to do climate change — I’m a scientist — but we can’t promise every American a government job.”

“If we want to get universal health care coverage, I believe that health care is a right and not a privilege, but you can’t expect to eliminate private insurance for 180 million people, many of whom don’t want to give it up,” he continued.

Another standout moment for Harris began with her playing the race card to interject in a conversation about police violence, and ended with a direct challenge of Biden for his policies on desegregation.

“As the only black person on this stage, I would like to speak on the issue of race,” Harris said over the moderators. She went on to say that every black person she knows has been the subject of some kind of race-based discrimination, and said she grew up in a neighborhood where her parents were told she couldn’t play with some of the other kids because she is black. Then she turned to Biden.

“I do not believe you are a racist, and I agree with you when you commit yourself to the importance of finding common ground,” she said. “But I also believe, and it’s personal — and I was actually very — it was hurtful to hear you talk about the reputations of two United States senators who built their reputations and career on the segregation of race in this country. And it was not only that, but you also worked with them to oppose busing.

“And, you know, there was a little girl in California who was part of the second class to integrate her public schools, and she was bussed to school every day,” she continued. “And that little girl was me.”

8. Buttigieg owns up to tense race relations in South Bend

Another surprisingly vulnerable moment happened when Buttigieg owned up to problematic race relations in his city.

“Your community of South Bend, Indiana, has recently been in uproar over an officer-involved shooting,” a moderator said. “The police force in South Bend is now 6 percent black in a city that is 26 percent black. Why has that not improved over your two terms as mayor?”

Buttigieg replied, “Because I couldn’t get it done.”

“My community is in anguish right now because of an officer-involved shooting, a black man, Eric Logan, killed by a white officer,” he continued. “And I’m not allowed to take sides until the investigation comes back. The officer said he was attacked with a knife, but he didn’t have his body camera on. It’s a mess. And we’re hurting.

“And I could walk you through all of the things that we have done as a community, all of the steps that we took, from bias training to de-escalation, but it didn’t save the life of Eric Logan. And when I look into his mother’s eyes, I have to face the fact that nothing that I say will bring him back.”

9. Sanders frustrated by his own quote

In a classic politics moment, Sanders was visibly frustrated by a question about his position on gun control, and claimed his position was misrepresented.

“A Vermont newspaper recently released portions of an interview you gave in 2013 in which you said: ‘My own view on guns is, everything being equal, states should make those decisions,’” the moderator said. “Has your thinking changed since then? Do you now think there is a federal role to play?”

“No,” Sanders replied. “That’s a mischaracterization of my thinking.”

“It’s a quote of you,” the moderator said, prompting laughter from the audience.

Hickenlooper reiterated his caution against socialism in a forceful closing statement.

“You don’t need big government to do big things,” he said. “I know that because I’m the one person up here who’s actually done the big progressive things everyone else is talking about. If we turn towards socialism, we run the risk of helping to reelect the worst president in American history.”

11. The guru promises to ‘harness love’ to defeat Trump

Williamson, whose book won acclaim from Oprah Winfrey, vowed to beat Trump with love in her closing statement.

“So I, sir, I have a feeling you know what you’re doing,” she concluded. “I’m going to harness love for political purposes. I will meet you on that field. And, sir, love will win.”