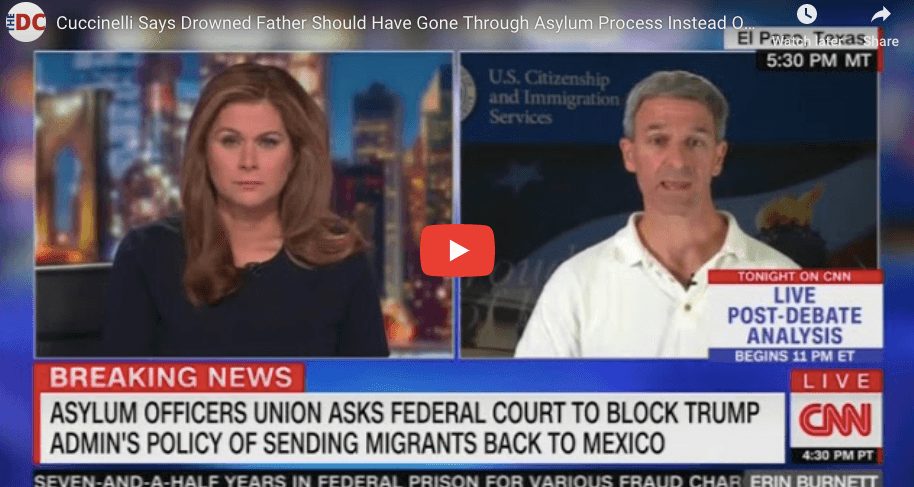 Acting Director of the United States Citizen and Immigration Services Ken Cuccinelli said Thursday that the father who drowned while attempting to cross the border should have gone through the proper asylum process.

Cuccinelli referenced an incident wherein father Oscar Alberto Martinez Ramirez and his daughter Angie Valeria were found drowned on the banks of the Rio Grande.

“The reason we have tragedies like that on the border is because those folks, that father didn’t want to wait to go through the asylum process in the legal fashion, so [he] decided to cross the river,” Cuccinelli told CNN’s Erin Burnet.

“Until we fix the attractions in our asylum system, people like that father and that child are going to continue to come through a dangerous trip,” Cuccinelli said.

“Let’s not kid ourselves about how dangerous a trip that our laws, as dangerous as they stand now, are attracting these people into,” the USCIS acting director said. “The tragedy will only end when Congress finally fixes the loopholes.”

President Donald Trump chose Cuccinelli to serve as Acting Director of the USCIS June 10. The president has made it known that he aims to go in a “tougher” direction on immigration policy and that Cuccinelli’s appointment is a step in this direction.  (RELATED: Trump Officially Taps Ken Cuccinelli To Lead Citizenship And Immigration Service)