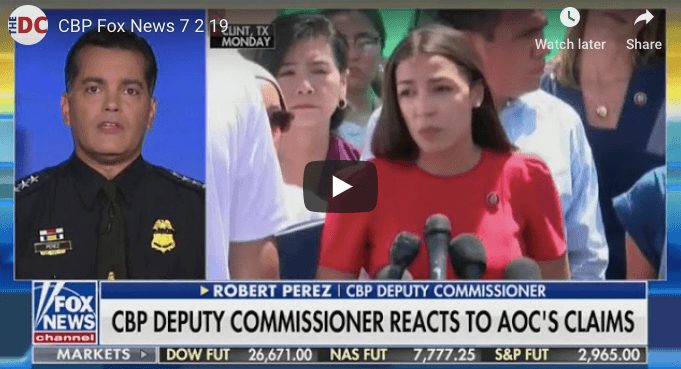 Rep. Alexandria Ocasio-Cortez said migrant women held in a Customs and Border Protection facility were told to drink water out of toilets, but an agent has directly refuted the allegation and she has yet to clarify if she actually saw such an action occur.

“Officers were keeping women in cells w/ no water & had told them to drink out of the toilets. This was them on their GOOD behavior in front of members of Congress,” Ocasio-Cortez tweeted Monday after visiting her first CBP detention center that day. It was her first accusation that women in the Texas facility were being explicitly told by agents to drink water from toilets.

Ocasio-Cortez later spoke to reporters outside the facility, and her comments suggested she personally saw women drinking out of a toilet.

“These women were being told by CBP officers to drink out of the toilet. They were drinking water out of the toilet, and that was them knowing a congressional visit was coming. This is CBP on their best behavior,” the New York Democrat stated Monday. However, she did not provide an answer when a reporter asked if she personally witnessed this.

A CBP agent who was reportedly close by as Ocasio-Cortez toured the facility said the congresswoman is purposely misconstruing a story she heard.

“So this is what happened with the migrant and drinking water from toilet: She wanted water, didn’t know how to use the faucet in the cell and drank from the toilet. She never told AOC that we made her drink from the toilet. AOC, of course, changed it. … This was when she [the migrant] was apprehended and brought into the facility,” according to an unnamed agent who spoke with the Washington Examiner.

It was later clarified the toilet in question was connected to a faucet and sink marked “potable water.” Ocasio-Cortez said women were told to drink water from the bowl because the faucet wasn’t working.

Previous Article
A Look Inside The Fight To Fix Education, And What It Means For The Future
Next Article
Cory Booker: Free Health Care For Illegal Immigrants Is Just Common Sense